11 Things You Need to Know Before Dating a Younger Guy

Posted by Sandy Weiner in dating in midlife, love after 40 | 2 comments 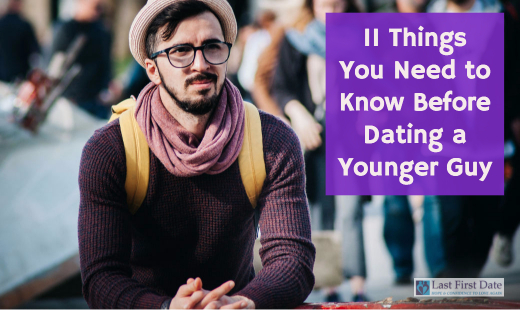 With each passing decade, the dating world becomes a more inviting place for women. Mariah Carey, Madonna, and J-Lo are taking full advantage of the liberated zeitgeist. Many women are following by taking ownership of their love life and dating younger guys. Age is just a number. Even so, you might not know what to expect going into a relationship with a guy 3, 10, or 15 years your junior.

In many ways, dating a younger guy is like dating any other guy. And in some ways, it’s authentically different. There are things you need to know before you go find your Prince Charming. The fewer the surprises, the better chance you’ll have for relationship success. Don’t be afraid to change up your dating rules if you have not found the success you are looking for yet!

1. He will surprise you

There will be many things about the relationship that surprise you. Studies show that women who date younger guys are happier and more committed. And your relationship with him will probably last longer than your friends think it will. According to research, longer than two years. Many people have assumptions about younger guys that end up being false.

2. He will have more energy

Let’s face it. He’s young, fun, and spry. Science has proven that with higher doses of testosterone pumping through his system, he has more energy. For last-minute happy hours, long walks on the beach, and other activities that benefit from his stamina. He’s not begging to stop at 8:00 pm or complaining about his recent knee surgery. It’s refreshing to be with a guy who can keep up and be ready for more when you ask for it.

3. He will have less experience

It’s useful to remember that younger guys have less relationship experience. That means he might not know how to handle conflict right away, or reign in his jealousy. It also means he’s open to feedback and reason. He isn’t set in his ways yet like older guys. Most younger guys love dating older women because they know you can show them the ropes.

4. He will be easier to meet than you think

Technology is allowing women to meet interested men faster and easier than ever before. If you have not given thought to trying out online dating you need to, especially if you are interested in dating a younger guy. You will be hard pressed to find a faster way to meet several single guys than online. We have a lot of great articles on Lastfirstdate.com about online dating after 40 that are worth a read.

5. He will appreciate your wisdom

You earned your judiciousness. A younger guy will see that. Studies have shown that many younger guys want a woman 3-6 years older than them. They appreciate that women have mastered the arts of juggling responsibilities and dealing with the complexities of life. An older guy may fail to recognize your wisdom because he expects it. If you’re not used to being valued for your accomplishments, it could be an adjustment. Share your wisdom with him; most younger guys are open to advice from their partners.

6. He will have different perspectives

Chances are, you and he grew up in different decades. At least, you may be enough years apart that cultural norms are different for him than they are for you. Where texting with emojis is the default mode of communication for him, that might not be the case for you. It can be an opportunity to learn about the current generation. What’s going on in their world? How do younger people deal with the current political climates? And what is the appropriate use of a smiling poo emoji?

7. He will have fewer expectations

8. He will have less baggage

One of the greatest benefits of dating a guy with less experience is that he comes with less baggage. He won’t have ex-wives calling at odd hours or custody battles to work out complicated childcare. He’s not bitter or jaded yet. Or distrustful of women. He’s still hopeful. You may have to be patient with his inexperience once in awhile. But it’s worth knowing he’s not carrying around a suitcase full of drama.

9. He will be more open-minded

Most younger guys have a more yielding disposition compared to their older counterparts. They aren’t stubborn yet. But beyond that, they’re more open-minded about relationships, love, and life. They’re more accommodating. It can be an adjustment because you may expect pushback. When you don’t get it, it can seem like he’s being “compliant.” He probably has fewer high-stress responsibilities than you, so it’s easier for him to be open with plans and ideas.

Guys reach their sexual prime in their twenties. They have many years ahead of them before reaching for the blue pill. With strong libidos and great stamina, you’re in for a treat. Most of them are willing to try new things and will defer to an older woman to show him what she’s learned. Many older women believe that libido can’t outweigh inexperience. But when you combine the techniques he learns from you, with his never-ending stamina, you have a recipe for success. If you are just getting back into dating you can find more info about sex after 40 here.

11. He will make you feel young

Younger guys come with a unique vigor that’s infectious. Older guys can be weary, where younger guys are excitable and ready to learn. Expect to start feeling a sense of youthfulness creeping up on you. If it makes you uncomfortable, talk to him about it. Otherwise, enjoy your renewed sense of self.

The most important thing to know before dating a younger guy is that he’s in a relationship with you because he is into you. The number one question we hear is where can we meet older women when we are talking to young men about dating issues. Eventually, you’ll come to realize that the age difference takes a back seat to the connection you share. Your relationship is what you make it.

Dating a younger guy can be alluring, energizing, and fun. The tide has turned; women everywhere are owning their sexual freedom. Now you can make an informed decision as you take the first step in this new chapter of your dating life. Have fun, and let love guide your path.

This article was written by Nicole Atkins. She was trained as an academic dating and relationship researcher. Working with industry experts like John Gottman, she became adept at knowing what makes couples tick. She decided to forgo academic endeavors in favor of the pen. As a writer, she works to bridge the gap between academia and the masses by making science easier to enjoy. When she’s not writing, she’s climbing mountains and photographing her adventures.