5 Warning Signs that Your “Nice Guy” Is Actually a Jerk 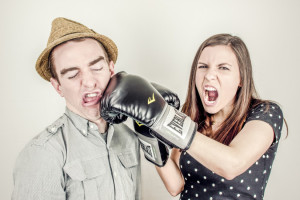 Today’s guest post is by Sarah Williams, a lifestyle writer specializing in dating advice. Her mission is to help busy men of all ages to find true fulfillment in social life.

Women often behave irrationally when it comes to dating and emotions. I’m a prime example of this. I would never admit that I like to date jerks, but somehow I keep ending up with them. Perhaps I subconsciously eliminate the good guys and feel attracted only to the biggest jerks.

Of course I don’t aim to hurt myself. I’m looking for a cute and good guy, but also one that’s interesting enough to make my heart skip a beat. Somehow, the good guys I choose always turn out to be jerks – or worse, crypto-jerks, who mastered hiding their true intentions!

I don’t believe girls who say they like “bad boys”. In fact, none of us really want to be harmed. We like to interact with bad boys because they are often more confident and adventurous. However, we want them to change their ways and be good to us!

Isn´t it absurd to chase a bad guy trying to make him nice? We should eliminate the jerks at the very first stage of courtship and avoid getting entangled in their masquerades. We should do this because “bad boys” are simply not a good choice for us.

So, how do you find out if the “nice guy” you’re hanging out with is really a jerk?

5 Warning Signs that Your “Nice Guy” Is Actually a Jerk

We often fall for guys who are near-professionals at seduction. We love their charm and confidence. They offer us subtle compliments, timed perfectly to pull on our heart-strings. They know when and where to touch us, what to say, and can have unbelievably perfect manners.

Jerks usually know how to treat women, because they’re experienced at seduction. Your heart often isn’t the first they’ve broken. So, if a guy seems too perfect to be true from the very first moment, he probably is.

2. He describes himself as a “nice guy”

When I hear a guy say, “I’m a nice guy,” it lights up a warning sign in my head. A true “nice guy” wouldn’t describe himself this way to a woman. He might be even afraid of being called a “nice guy” because girls often put “nice guys’ in the friend zone. The women think, “I like you, but I won’t sleep with you”. No guy wants to risk framing himself as the “friend guy”. What’s more, a truly nice guy would never highlight this trait in himself, because treating a woman well would just come naturally to him.
A player, on the other hand, wants you to fall into his arms and under his spell. He wants you to think he’s nice, so you feel more secure and get trapped in his web. By saying that he’s nice, a player is attempting to gain your trust.

Has a guy ever made a small negative comment about you which you couldn’t stop thinking about? Did he show a dislike for your friends? Did he always act like he’s right about everything?

If a guy judges your behavior or your friends, he’s probably not a nice person in general. Don’t tell yourself that it’s good for him to be so honest, or that he cares enough about you to correct your behavior. A man who can’t accept you the way you are isn’t the right man for you.

4. He Wants To Be the Center of Your World

Does he want to know what do you’re doing when you aren’t together? Does he get upset when you don’t reply right away to his messages? When people don’t behave the way he likes, does he find a way to turn the situation around so it seems like it was the other person’s fault?

Be careful. If a nice guy is controlling, jealous, and behaves like your entire world should revolve around him, this is a big warning sign.

5. You just feel that there’s something wrong with him

The most important point – trust your gut, and the facts. Deep in our subconscious minds, we know what kind of guy he is and what his intentions are. But, in our pursuit of love, we often just don’t want to see the signs that he doesn’t reciprocate our feelings or simply isn’t good for us.

Don’t make flowery projections about what could happen between you and this man in the future, because it can only blurry your vision of what is happening in the present moment. Also, avoid making assumptions about what he means by his words. If something he says isn’t clear, just ask him.

Focus on the facts, such as the way he treats you and if he is there when you need him. Actions speak louder than words!