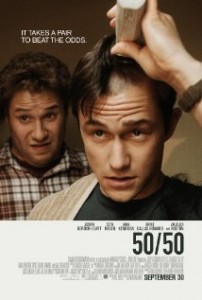 Just came back from the movie 50/50, based on a true story about a 27 year-old man who is diagnosed with a rare form of cancer, and the struggles to beat the disease and make sense of his changed world. 50/50, starring Joseph Gordon-Levitt, Seth Rogen and Anna Kendrick, is also a story about love in many forms.

The movie opens on the relationship between the main character, Adam, and his girlfriend, Rachel. The viewer immediately gets the sense that Rachel is not that into Adam. They haven’t slept together in weeks, and Adam is making excuses for Rachel, even before the cancer diagnosis.

After the diagnosis, Adam tells Rachel that she can have an out, that he would totally understand if she bailed on him. She says she’ll be there for him, but her actions don’t match her words.

In one scene, she shows up hours late to pick him up at the hospital after his chemo session.

In another, she takes him to the hospital for his chemo, but elects to sit in the car in the parking lot for four hours rather than come in and sit with him. She didn’t want to mix with the ‘energies’ of the hospital.

How many times have you been the ‘Rachel’ in a relationship where it’s not really working, but you ignore the red flags and hang in and stay for much longer than you should? Something keeps you there, but it’s not love. You might feel bad for your partner. Or guilty for not feeling the same intensity that they do. Maybe you’ve just grown complacent and it’s too hard to move on.

Or maybe you’ve been on the other end, like Adam, putting up with bad girlfriend or boyfriend behavior, hoping that things will get better. Only things don’t get better, do they? They just get worse.

In the movie, Adam gradually falls in love with another woman. I won’t give away the details, but this relationship feels right from the beginning. It develops over time, and is based on much deeper connections. The chemistry and love between these two is palpable. Even Seth Rogen’s character approves, and he hates all of Adam’s girlfriends.

When two people are truly compatible, lasting love is not only possible, it is probable.

When you try to force a relationship from a faulty connection between two incompatible people, problems will most likely ensue.

How do you know if someone is your boyfriend or girlfriend? Watch their actions, not their words. “I love you” doesn’t mean much if that person is not really an integral part of your life.

If you’re ready for a truly compatible relationship, one where love grows and lasts, stay tuned for information on my upcoming free webinar.