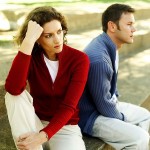 Have you ever been in a relationship with a man where you suddenly got this feeling in the pit of your stomach that something was off? And you decided to stuff it, not address it, and rationalize it to death? And then it came back to smack you in the face? He cheated on you. He treated you poorly. He dismissed you. All of these are possible when you don’t pay close attention to that nagging feeling deep within.

Those early warning signs are so important. You must pay attention to the brilliance of your intuition. Yet, so many women think they’re being too demanding if they express their needs/concerns. Ladies, if you’re not expressing your needs and paying attention to those bad feelings, it’s probably not going to end well. Wouldn’t you rather feel empowered and in control of expressing your emotions (and be heard and validated)? Here’s how…

7 Warning Signs that You’re in a Bad Relationship

1. His body is telling you something. Words are important in a relationship. Equally important is what his body is saying. Is he paying attention to you when you’re together? Is he looking at other people while you’re talking to him? Does he face you or face away? Is he texting while you’re talking? If he’s not fully engaged, let him know how it feels and what you need from him. If he’s defensive, that’s not a good sign.

2. The giving tree is spent. Do you feel like you’re giving and not receiving much in return? In a good relationship, you don’t need to keep tabs on how much each person gives or receives. It’s pretty organic. In a relationship that’s imbalanced, you can begin to feel unappreciated and taken for granted. Stop over-giving. And pay attention to how he gives. Make sure you feel a sense of equanimity in this aspect of your relationship.

3. Your emotional bank account is low. It’s much more important to gauge a man’s emotional wealth than his financial wealth. In the long run, a true partner is someone who gives freely from his heart and truly cares about you. He has your back, and he supports your goals and dreams. If your intuition is telling you that he’s not there for you in the most important ways, dump him.

4. He needs to be right. A healthy relationship is built on a partnership of flexibility and open-mindedness. If you are with someone who always has to be right, you are in the wrong relationship.

5. You don’t trust him. In a healthy relationship, you don’t need to disclose your every waking moment. A white lie here and there can even be a positive force in that relationship. For example, when you ask him, “Does this dress make me look fat?”, he probably should say, “No”, no matter what he truly thinks. You don’t always want to hear the truth. But lots of little white lies can lead to distrust in the relationships. He says he’s going to be somewhere after work, and you find out he went somewhere else. He makes excuses for why he didn’t call you or remember that you had a date. These excuses are a form of lying. Bottom line: don’t stay with a man that you can’t trust.

6. Is he in it for the long haul? If you’re looking for a long-term relationship and he’s looking for a fling, you’re in the wrong relationship. Make sure you both want the same thing before you get too involved. Better not to have surprises that can be avoided. Short-term commitments are also good indicators of his character. Does he show up to dates on time? Does he call when he says he will? Is he reliable? Reliability and commitment in the relationship are key to relationship success.

7. Are you sexually compatible? Does he want sex 5 times a week, and you’re happy with a twice a week tryst? Do you like to hold hands in public, and he never touches you outside the bedroom? Do you love to kiss, but he seldom does? These are all important components to true compatibility. If you are off on the sex-o-meter, you’ll be unhappy in the long term.

Pay attention to the warning signs, and you’ll have much less heartbreak in the future.

Here’s to your success in love,