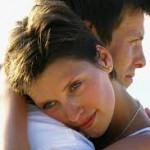 Okay, I admit it, I’m a sucker for a real life love story. Today’s story is about a beautiful dark-haired beauty I’ll call Lynn. Nine years ago, as a single 30 year-old mom raising a 1 1/2 year old toddler, the last thing on her mind was marrying again. She took a few years to get herself together before going on her first date.

Her first long-term relationship was all physical. Void of any deep connection, Lynn ended that relationship after about a year. She was seeking a loving, lasting relationship with a man of substance.

Lynn dated online for many years, dating men who were sweet, kind, but just didn’t fit right. She was getting tired of Match and JDate, when a friend suggested she go on OKCupid.

“I don’t want to spend any more money on online dating sites”, Lynn told her friend.

“OKCupid is free!” said her friend.

So, with much trepidation, Lynn signed on to OKCupid. As a new subscriber, she got hundreds of emails. She sorted through them all, and it was pretty much the same old, same old.

Until she saw a profile that stood out. A handsome man in a tuxedo! Now, that caught her eye. As she read his beautifully crafted words, she thought, this guy is smart and articulate, and he sure is cute. I’ll send him an email.

And that’s when she noticed where he lived: England!

“Oh well. This will never work. I’ll just send him a quick note to tell him how adorable I think he is. Can’t hurt.” She send the email and to her surprise, he wrote back!

They continued writing each other, thinking they would probably never meet, so what the hell, no pressure, only fun.

And then Lynn turned 40. ‘Jack’ noticed her birthday had passed because her profile was updated.

“So, you just had a birthday, huh. How are you celebrating?” he asked.

“Not doing much”, said Lynn.

So, Jack made his way across the Atlantic to Connecticut, staying at a nearby hotel, (just in case he turned out to be a serial killer, Lynn joked).

The rest is history. Lynn was beaming as she described to me how it felt to feel love at first sight.

Jack has been coming in once a month for the past seven months, and he’s moving to New York soon so he can be close by. They’ve already met and fallen in love with each other’s families.

I saw his photo. He IS adorable. No, he’s downright handsome. And I can only imagine how alluring that is combined with that British accent…

So folks, I share Lynn and Jack’s story because I want to restore some hope to all those of you who may think that love stories like these only happen on the big screen. They happen in real life, too.

Here’s my take on why it worked:

1. Lynn took a chance on a guy who lived thousands of miles away. Jack did the same.

2. They were both very relaxed. No pressure, no sense of urgency or neediness, which is key in choosing a mate with your eyes wide open. No wishful thinking, no projecting or fantasizing.

3. They were both willing to make a big effort to make a long-distance relationship work.

4. They were both on the same page in terms of being ready to commit to each other.

The rest is history. I can’t wait to hear about their wedding. I am sure it will be like a fairy tale. But it will be steeped in the reality of two lovers who took action to make a great union become a real life love story.

It could happen to you!