Home » dating a dangerous man » Are You Dating a Jerk or Just a Man Behaving Badly?

Are You Dating a Jerk or Just a Man Behaving Badly? 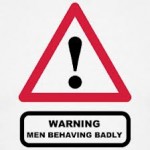 I have dated my share of jerks. But sometimes it can be hard to know if a guy is a full fledged jerk or really a good guy who says or does jerky things. It’s important to know how to distinguish between the two. Too often, my clients forgive a man who is a bonafide jerk, but dismiss the men who are basically good men with jerky behavior. How do you know ~ are you dating a jerk or just a man behaving badly?

What constitutes a jerk?

There are two basic categories of men behaving badly: The Man-Jerk and The Bad Character Jerk.

Some examples of a man-jerk are:

These behaviors might turn a woman off, but they are more about being a man than being a jerk. Perhaps you’re dating a guy who hasn’t been with a woman he’s attracted to in ages, and he’s just nervous around you. Guys who find women beautiful are…..human. As long as he’s not hitting on anyone else and is attentive to you, let it go. There might be a great guy lying beneath that jerky exterior.

Which leads us to category two:

He’s the guy who:

These behaviors usually indicate narcissism or some other form of bad character. Do not give these guys a second chance.

Bad character can’t really be refined. Awkward man stuff can be addressed and improved upon.

My client Nancy was on a date last week with a guy she’s been seeing for a few months. She’s learned to overlook his blatant sexual comments even though she sometimes feels objectified. Deep down, she knows he’s a good guy. He would never pressure her to do anything sexually that she’s not ready for. In fact, he’s moving slowly in that arena. He only talks a ‘sexy papa’ game.

She’s seen him go out of his way to give up his seat at the movie theater to a woman whose seat was wet. She’s observed how kindly he treats her; he opens doors, walks her to her car at the end of a date, calls to make sure she arrived home safely. He cares deeply about his family, and she knows because of his actions ~ he takes his elderly mom to get her hair done, to the bank, and to shop for food every week. He drives her to her doctor’s appointments.

If he makes a comment about how he’ll pay for dinner because he knows she’ll put out later, she might feel a little sting, but she knows he’s only kidding. He respects her, and that’s what matters most.

Have you dated a jerk? How did you know whether you should give him another chance? Please share your comments below.

And remember, if you want to immediately turn around your online dating success, click here for my free report on improving your profile essay so you’ll be attractive to the right man!