Home » dating after divorce » Are You Over-Sharing on a Date?

Are You Over-Sharing on a Date? 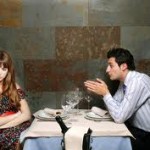 I saw a cute guy on JDate. His profile resonated with me; his depth, his worldview, his love of the Grateful Dead! We emailed back and forth a few times, and then jumped to a phone call the next day. It’s important to see a relationship escalating, from email to phone call to first date and beyond. There are many men who don’t get past the emails and im’s, and to them, I just say, “next!”

Well, Mr. Cute guy was adorable on the phone. We spoke for about an hour, sharing many common experiences. We decided to meet the next night. This was exciting! So much possibility…

I drove a half-hour to a restaurant that was midway between our homes, found a seat, and waited in anticipation of Cute Guy.

Minutes ticked by, and there was no sign of him. Could he be standing me up? He didn’t seem like the type. But, why didn’t he call? Where was he.

About twenty minutes later, I texted him, “Where are you? Hope all is okay.”

He texted back that he was on his way, and he profusely apologized for being late. He’d explain when he saw me.

Shortly thereafter, he walked into the restaurant. Online, he was quite handsome. In person, he was objectively good looking, but his looks weren’t appealing once he opened his mouth to speak.

After apologizing profusely, he launched into a story about his ex that lasted the entire date.

There was bitterness, blame, anger, and a looooooong story.

I was tired. I had driven a distance, and I had waited a half-hour for him. I wasn’t interested in him or his boring story.

So, I nodded. I asked a few questions. I tried to change the topic.

I was done with Cute Guy. I was thrilled when the restaurant closed less than an hour after he arrived.

Mr. Cute Guy was not the first person to over-share on a date. He had no sense of how his story was affecting me. Because I remained fairly mute throughout.

While you can’t always predict how a guy will be on a date, you don’t have to sit there nodding your head, tolerating a bitter story about an ex.

I learned that I can change the outcome of a bitter story by being more direct, less passive-aggressive.

Here’s what I might say next time a guy launches into his angry ex story:

“It sounds like you’re still pretty angry at your ex. Sorry to hear that. But, you and I are together tonight, not your ex. I’d like to hear more about you. Tell me about your best childhood memory.”

The point is, you don’t have to tolerate a bad conversation. Take charge of how you respond on a date. Change the conversation.

If he still continues his diatribe, you can say thank you, good night, and never see him again.

By the way, I have been equally guilty of over-sharing, especially when I first started dating after my divorce. I spoke too long on first phone calls. I shared too much of my personal life before I knew much about the guy.

And I learned from the experience. I listen more. I steer conversations in a good direction. And I invest less time in a guy before I get to really know him.

What’s your experience with over-sharing on a date?

Have a great weekend. Happy dating!