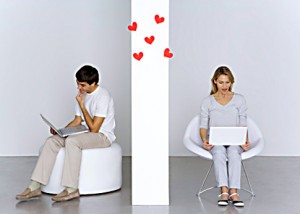 “Him again?” asked ‘Charlene’, a client who received yet another email from ‘Bob’ last week. Over the past two years, Bob had started many email conversations with Charlene on the online dating site, JDate. They connected, made plans to meet, and then he disappeared. So when he popped up in her inbox again, she didn’t trust him to follow through. Her gut said, “Ignore him”, but her heart opened up to give him another chance. Good idea?

What would you do? It’s easy to make up reasons for why someone disappears online. Here are a few:

1) He met someone else

2) He’s just not that into you

After two years, Charlene and Bob finally had a date! Would he show up? Would he be a jerk? A nice guy? An arrogant snob? She was prepared for any outcome. In his profile photo, he had a smirky-looking smile, which she had interpreted as conveying a cocky personality. With his ivy league background, he could very well fit that bill. Bob walked in the door of the restaurant, and arrogance was the furthest thing from Charlene’s mind.

Bob was shy, and he appeared to be much older than in his photo. He stuttered, which is probably why he hid behind the online communication for so long. Charlene and he clicked. Conversation flowed, and she was glad she had given him a chance.

If she had followed her gut, she would never have dated Bob. I don’t know if they will end up in a relationship, but Charlene learned that it’s important to be open, especially when you’re dating. When you pass judgment, you could be totally off. And a connection in the flesh is totally different than an online or even phone communication. Once you meet in person, you can be a much better judge of chemistry and connection.

If you want more success in dating online, I encourage you to be a little more like Charlene, open to a possibly good connection, rather than imagining that it won’t work out. You never know…