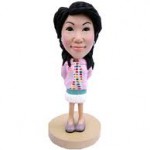 Have you ever been on a date with someone who bored you to tears? Someone who spoke in great detail about a topic of no interest to you? And you found yourself nodding your head like a bobble-head, hoping that he’d just stop talking, praying for the date to end….

My client Cindy met a guy online last week. Cindy is in her late fifties, but looks at least ten years younger. Vibrant, funny, pretty and smart, she has no trouble attracting men. Her problem is finding a man who is her intellectual and spiritual match.

She saw Darren’s well-written and interesting profile, coupled with his handsome photos, and knew she wanted to find out more about this guy. She wrote him a heartfelt email, sharing how she experienced him through his profile.

He wrote back right away, equally impressed with her profile, and they began a long and vibrant phone conversation the next day. They decided to meet the following night.

This being a first date, and accountability to time being an important value to Cindy, she was not happy, but still wanted to give Darren the benefit of the doubt.

As soon as he walked into the restaurant, Cindy knew that this would be their last date.

Darren looked handsome in his photos. In person, Cindy felt no attraction. There was an inner spark missing and something in his posture that felt off to Cindy.

He immediately launched into a long, overly detailed story about why he was late. Over-sharing on a first date is a big mistake that many people fall into. Especially when that sharing is about an ex.

Cindy found herself nodding, falling asleep, too tired to say, “Please stop talking about your ex. Let’s change the topic.”

She did interject a few times and shared a bit about her day. His responses to her were so disconnected, she began to feel that it was a waste of time to say anything meaningful at all.

The date ended after an hour and a half of bobble-heading, nodding, counting minutes.

My perspective on this date?

1. Profiles photos can be deceptive. Don’t judge a book by its cover. Beauty is in the eyes of the beholder. There are many cliches I can use to describe the same thing: a person is only attractive based on their inner character and personality. I don’t know why so many women think they have to be model thin and wrinkle-free to attract a man. Your character and confidence are what matter most. I am not advocating for letting yourself go or coming to a date not looking your best, but that’s only part of the picture of what makes you attractive. Conversely, give a guy with a great personality and solid values a chance, even if he is not your ideal ‘look’.

2. Meeting in person is so important – the sooner the better. Cindy was smart to meet Darren a day after they first connected by phone. Many people take too long to meet. They talk by phone for days, and sometimes weeks, before meeting for the first time. This can lead to a fantasy relationship, not based in the reality of what it’s like to actually be with that person. Save time and possible disappointment by meeting right away.

3. There is no virtue to listening to someone talk about their ex. Cindy should have stopped Darren from talking about his ex. That conversation was a deterrent to getting to know each other. It kept them from being present. It kept them from having a meaningful discussion. But she was exhausted. The date started late, he was a half hour late, and she had no steam left to interrupt him and redirect the conversation.

4. If you find yourself bobbing your head too much, change the conversation or end the date! If you’re disinterested in his conversation, gently but firmly change the topic. If he’s only talking about himself, he might be doing so out of nervousness or narcissism. It’s sometimes hard to tell on a first date, but pay attention to your intuition. Like I often say, it’s the wisest part of you. If you’re not enjoying the date, end it. You’ll be doing both of yourselves a favor.

Have you been on a bobble-head date? Please share your stories here.