Dad’s Fallen and I Can’t Get Up: Reflections on Losing a Parent 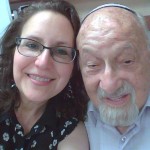 On Monday, February 23rd, my father died suddenly after a brief hospitalization following a fall in which he broke several ribs. Losing a parent is difficult, but our relationship, like most father/daughter relationships, was complicated. He suffered from chronic depression and had multiple bone fractures and other medical issues. But during the last three years of his life, he was like Benjamin Button. He seemed to be getting younger and happier every day. He was more mellow, less angry, and more empathic. I’ll miss him.

As I was searching through my files, I came across an article I wrote about him in 2010. It’s called, “Dad’s Fallen and I Can’t Get Up”.  It’s about the last time he broke a rib, and how I dealt with the stress of being his caretaker.