Home » dating after divorce » Chemistry or Compatibility: Which is more important?

Chemistry or Compatibility: Which is more important?

Posted by Sandy Weiner in dating after divorce, single women over 40 | 3 comments 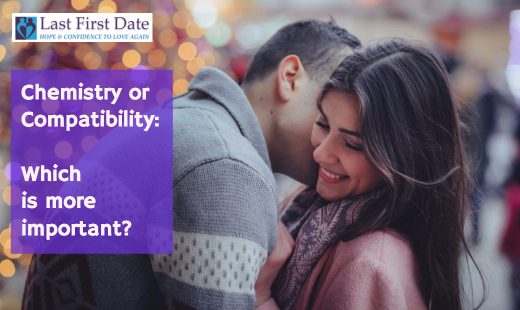 Which do you think is more important: chemistry or compatibility? Can a relationship have one without the other? Let’s explore with this case study.

Ah, the age old question: which is more important, chemistry or compatibility? Are they equally important? And do men and women have different standards for chemistry and compatibility?  Let’s begin with the last question. Chemistry or compatibility, men vs. women?
—
In my experience, women place less importance on physical appearance than men. Most women will give men a chance (or two or three), unless they are totally turned off on a first date. The majority of women in my dating coaching practice are interested in emotional and intellectual compatibility first and physical compatibility or chemistry second.
—
The men I’ve spoken with usually judge a woman’s date-ability by how physically attracted they feel on the first date. If they feel chemistry, there is a second date. No chemistry? Next!
In online dating, a woman’s profile picture is the first and most important way to get a man’s attention. Men seem to place much more emphasis on a woman’s looks than her profile essay. That makes many women angry, but men are visual creatures. They pick with their ‘small head’ first. It’s just the way it is.
Women will be drawn in by a man’s appearance, too, but they’re far less judgmental about looks. Most women want to discover what’s behind that profile pic. Is he a man of character? Does he have good values? Does he seem emotionally available? While a nice face is appealing, a nice guy is going to get the girl.
—

Compatibility is about common values

When you’re compatible, you share life goals, you feel like you can be yourself with each other, your values are similar, and you have a common world view. You ‘get’ each other. Compatibility is essential for a relationship to last.
—

Chemistry is about attraction

When you meet someone new, you feel an instant connection. There’s an energy in the space created by the two of you, and it feels electric. You’re turned on, but not just because of physical appearance. You like the way he carries himself, the way he treats you and others. Chemistry is also essential for a relationship to last.
—

CASE STUDY: Can Compatibility without Chemistry Grow into Love?

—
Lori met Harvey online. He wasn’t her type—tall, bald, and athletic. Harvey was overweight, and he dressed poorly. But Lori was able to overlook his physical traits, because she was drawn to many other qualities. He was smart, successful, grounded, and kind. He was a good listener. And he treated her with tremendous respect, always driving over an hour to meet her. Plus, it didn’t hurt that he had beautiful eyes.
—
When she first met him, she wasn’t sure if she could ever fall for him, but Harvey is growing on her. Lori is used to men who treated her poorly. She had been married for 30 years to a disgusting cheating narcissist. And her boyfriends post-divorce were also unkind. They never made much of an effort to court her. She was always driving to them. Paying for them. Cooking for them. (Notice a pattern?)
—
I coached Lori to become a woman of value and stop letting men treat her like a last minute option. She learned to recognize the red flags of a narcissistic or selfish men and didn’t date them anymore. She stopped doing so much for men to give them a chance to step up for her. She finally learned to lead with her feminine energy—to be nurturing and loving, to be sensual and playful, and most importantly, to receive from men.
—
I told her that the best way to know if a man is interested in her is for her to do nothing but say thank you. She stopped taking charge and trying to control. I coached her to date men who truly want her, not the other way around. Harvey is definitely pursuing her, and it feels good for her to be desired.
—
It’s too early to know where this relationship will go, but suffice it to say that Lori is happy in a relationship for the first time. They have fun together. They have great conversations. The physical chemistry is growing.
—
My question is, how many men would give an overweight, semi-attractive woman a chance?