Home » dating a dangerous man » Dating a Narcissist or Just a Jerk?

Dating a Narcissist or Just a Jerk?

Posted by Sandy Weiner in dating a dangerous man, dating a narcissist | 3 comments 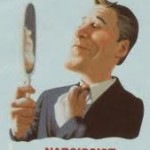 I am wondering if a guy who seems interested (asked me out) is a narcissist. Always stares in a prolonged almost controlling, probing manner. We finally went on a ‘date’ after him showing a lot of interest and he acted aloof, distant and bored, left early. I felt he was not interested. Then the pattern of staring, getting attention continued (he is a collegue) asked me out again but never followed through, but continued to keep me hanging. Like he enjoyed my attention (which wasn’t over the top) but not interested in me. I have basically cut him loose. When he stares into my eyes, I feel he is looking for his own reflection. A very strange experience. He then spread rumors around the office saying he was going on ‘heaps of dates’ so I would find out about it. He really hurt my feelings as I did like him. This went on for quite a while but he will still try and get attention and stare whenever he can, what is his deal?

“When he stares into my eyes, I feel he is looking for his own reflection.” That is the classic definition of narcissism as defined by Narcissus.

Narcissus or Narkissos (Greek: Νάρκισσος), possibly derived from ναρκη (narke) meaning “sleep, numbness,” in Greek mythology was a hunter from the territory of Thespiae in Boeotia who was renowned for his beauty. He was the son of a river god named Cephissus and a nymph named Liriope. 1. He was exceptionally proud, in that he disdained those who loved him. Nemesis saw this and attracted Narcissus to a pool where he saw his own reflection in the water and fell in love with it, not realizing it was merely an image. Unable to leave the beauty of his reflection, Narcissus died. 2. Narcissus is the origin of the term narcissism, a fixation with oneself.

Whether you dated a narcissist or simply a jerk who talks behind your back about his conquests or simply negates your feelings, he’s someone to avoid at all costs.

What attracted you to this guy? Is he charming? Are you happy with the little attention he gives you? Does it make you feel special when he gives you ‘crumbs’ of attention.

Dating a narcissist or just a jerk?

It doesn’t really matter. What matters is that you’re spending any energy even thinking about him. It’s important for you to honor yourself enough to stop letting these types of men get under your skin. I should know…I dated narcissists and jerks for many years before figuring out how to break the pattern.

Find a healthy guy who’s really into you, not only into himself, and you won’t have to question ‘what’s his deal?’ again.