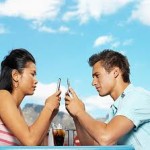 Technology is a double-edged sword. Texting is easy and quick. But it can also be a substitute for real connection, and in my opinion, that’s when it fails miserably. People break up all the time over misunderstood texts.

In my dating coaching practice, I see many couples substituting texting for connecting authentically with each other. Misunderstood texts can ruin relationships.Whether you’re in the courting phase or you’re in a long-term relationship, it can be confusing to figure out when to text and when you should just pick up the phone and talk or meet in person. How do you know when to text and when to talk?

Talk by phone or in person when…

1. Conveying emotions. The first rule of dating etiquette is to speak your feelings, not text or email them. Emotions are difficult to convey by text, and nuances often get lost. If you have something important to say, speak it, don’t type it. “I lv u” is so much better whispered in her ear than popping up on her iphone. “i am angry at u” is better said face-to-face, even though it’s much easier to hide behind the safety of a text.

2. Confronting/having a difficult conversation. People notoriously shy away from difficult conversations. It’s so much safer to write it than speak it when the stakes are high. I encourage you to set aside some face-to-face time instead. It might be scary, but if you have the right skills, confrontation is not as bad as you think. It’s an opportunity to bring you closer. And it’s really about being honest with each other, which is one of the cornerstones of a great relationship.

3. Breaking up. Remember the Sex and the City episode when Carrie Bradshaw is shocked by the guy who breaks up with her in a Post-it? A breakup  text is pretty much the 21st century version of that Post-it breakup. Please have the courage to say the tough things to each other. Breaking up should be done with dignity. Do it in person.

1. It’s informational. Text to tell him you’re going to be five minutes late. Or text the address where you’ll be meeting for a date. Simple, informational, and sometimes makes more sense than talking.

2. You’re thinking of him/flirting. Let him know he’s on your mind. It’s fun to flirt by text. “Ur sexy”. “Can’t wait to c u.” Texts like this can be fun and flirty in between dates and phone calls. Just letting him know you’re thinking of him can make his day. When he texts you that his temperature is elevated, it brings a smile to your face.

But be careful not to text too much. And don’t get anxious if he doesn’t reply immediately. You can kill the relationship with anxiety. One of my clients received an inordinate amount of texts the day after their first date. He got angry when she didn’t immediately reply to his flirty texts even though she said she was at work. Bad move! He was history before they even had a chance at a relationship.

One of my clients  recently began a new relationship with a guy she met online. They quickly progressed from email to IM on the dating site. That brought them to their first phone call. Two days later, they video chatted. The connection was hot and heavy. The attraction was strong. My client was excited. Finally, a guy she could connect with. Someone with potential!

Flirty texts followed, back and forth throughout the weekend. This was fun.

Two days later, he called her when they were both in bed for the night, and they had a mild version of phone sex. Hmmm, a little premature? They hadn’t yet met. This was a yellow flag, something to keep her eye on. Not necessarily an issue, but if he’s interested primarily in sex, it’s too early in the relationship to be this sexual. Eyes open….

They had their first date a few days later. There was attraction, and the conversation was flowed. Yay!

Second date a week later. All was good.

And then the texts began. Nonstop texting, but the heat was gone. And the phone calls had slowed to a crawl.

Instead of ‘good morning gorgeous’, she got, ‘good morning!’. Instead of a morning call on his way to work, she got this text: ‘one more client and then lunch!’. The texts were informational. And the relationship was changing direction; a sharp turn to the right. Or maybe downhill is a better description.

Frustrated with all the texts, my client texted him back, “Enjoy your day. I prefer talk to text. Speak to u soon.”

And she heard nothing from him for several days.

She finally wrote him an email:

“I’m not sure what’s going on, but you dropped out of communication suddenly and with no explanation.

If you’re angry/upset with me about something, I’d like to have an open discussion.

We went from ‘hot’ to ‘not’ in a few weeks’ time. I am really confused about what’s going on for you.

It doesn’t feel good to me to have you just drop out of my life without talking about what happened.

Please give me the courtesy of an explanation.”

He immediately responded that nothing was going on and he’d call her that night. They spoke for about an hour as if nothing was wrong.

And then the texting began again. No calls, only texts.

My client was frustrated with this type of communication. What happened to all the potential of a relationship?

I advised her to let him go. He was communicating in a very immature way. He wasn’t man enough to admit that perhaps he’d lost interest. And he was giving her crumbs.

No one deserves crumbs from anyone.

She left him to make room for a better relationship with a right-fit man.