Home » dating a dangerous man » Are You Dating A Jerk (or just a guy behaving badly)?

Are You Dating A Jerk (or just a guy behaving badly)?

Posted by Sandy Weiner in dating a dangerous man, dating a narcissist, dating after divorce, dating in midlife, red flags in relationships | 0 comments 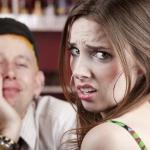 I’ve been dating Alan for three months. For the first time in years, I feel a very strong connection. I love talking to him. He is exciting, thoughtful, and fun. He “gets” me and I “get” him. With this strong chemistry comes fire and passion. But every once in a while, he says or does something that makes me concerned about his character.

For example, I recently sent him an email in which I shared something very important to me. Instead of responding with thought and kindness, he sent back a stupid, insensitive, crass, sexually explicit email that shocked me.

I responded with humor, thinking he was probably just being a guy, but it stayed in my mind. There are other things he’s done that have me concerned about his character. How do I know if I’m dating a jerk, or a man who’s just being a guy?

Men and women generally approach relationships very differently (note: my comments are general, but there are always exceptions to the rule). During the courtship phase of dating, men lead with physical/sexual interest. They want to know if a woman will be a good sex partner, and that physical connection can sometimes lead to love. Women usually date with the intention to find love, and sex is a byproduct of that union. That’s important to understand.

So when he whispers sexually explicit sweet nothings in your ear on the second date, he’s probably just being a guy, not necessarily a jerk. When he comments on your online profile by saying that he thinks you’re hot, it might seem like he’s only interested in you as a sex object. And you’re probably right – to some degree. He is interested in sex. But he might also be interested in your personality, your intelligence, and your good nature. That matters more to you, right? Following are some clear signs that he’s either a jerk or just a guy behaving badly. Read more here…

(This article first appeared in BetterAfter50.com, where Sandy writes as the weekly dating expert.)