Posted by Sandy Weiner in communication skills in dating, dating a dangerous man, dating after divorce, dating in midlife, single women over 40 | 0 comments 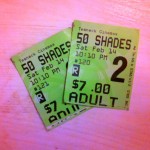 Have you seen the movie, 50 Shades of Grey? I confess that I read all three books and went to see the movie with my boyfriend on Valentine’s Day weekend. Not because I loved the books – they were poorly written (enough with Ana’s inner goddess and her deep sighing). Not because I thought the movie would be an Oscar contender – it’s definitely not (even though Ana’s lip biting deserves an honorable mention). But as a dating coach, I was curious about why the books and movie generated so much interest. The characters are not believable, the story line is weak, and there are many things that are disturbing about 50 Shades. Does it glorify abusive relationships? In some ways, but it’s not black and white. Does it give the wrong messages about love? Yes. But one thing I feel the movie/books did do well is normalize having open conversations about sex.

My married friends are spicing up their sex lives for the first time in decades. Who doesn’t want less boring routine sex? My single friends are talking about ways to have more fun in bed and are exploring their sexual fantasies. People are able to give language to what they are willing and not willing to do in bed. The books make it easier to discuss their “hard limits” – the things that are off limits sexually. I think that it’s crucial to be able to discuss all of your needs in a relationship. And for those reasons, I think 50 Shades served a good purpose.

50 Shades of Grey. Fantasy? Reality? Or a mere glorification of abusive relationships?

Here’s what my Facebook friends wrote (highlights are mine) about their take on 50 Shades of Grey.

Josh: Don’t know if you read the letter to my children published about the movie. This is how I responded to that:

Curious. I think the author should have written this:
“Kids, first and foremost I want to tell you that Fifty Shades is a movie. Movies are not reality. Some people have issues differentiating the two, and I am one of them. Fifty Shades was a very popular book along with its sequels precisely because it was fantasy, not reality. It clearly was a fantasy that many women enjoyed otherwise they would not have bought the 2nd and third books and the first would not have been a phenomenon. Sexual fantasies can seem a bit strange and like all humans are very diverse and understanding them is complicated. So, while you should not feel ashamed of your fantasies, it is important that you, unlike me, be able to distinguish them from reality. That is the most important lesson you need to learn from watching any movie, especially ones that have to do with love, even when they have nothing to do with sex. All the more so when sex is involved though because it is a complex area that even many adults like me clearly don’t understand. Just remember, if it is in the movies, then unlike the internet, we know it is not true.”

Sandy: Wow, what a great conversation, Susan, and Josh. While there were many things I disliked about the movie and books, what I did like about 50 shades is that it opened up conversations like these, and I think we need to become more comfortable with our bodies and our sex lives. There’s still a lot of shame about body image and sex in our society.

What about you? What do you think of 50 Shades? Does it glorify abusive relationships? Do you agree or disagree with the comments in this post? Please share your thoughts.