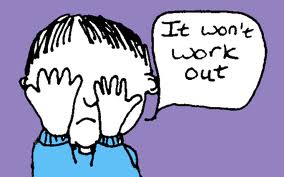 Are you afraid to fail? How often do you pressure yourself to be great at something  – the first time you do it? I’m raising my hand high. For most of my life, I was afraid to start new things unless I was already great at them. As you can imagine, that prevented me from taking risks. And it kept me small in life. With growth, failure is pretty much a prerequisite. In dating, it’s the default setting, according to dating coach, Evan Marc Katz. You are going to fail over and over again until you meet that special someone. Expect failure in dating, and you’ll be less surprised and angry when it happens. You’ll feel less dejected and will stop taking it so personally when yet again, you’ve met someone who’s not ‘the one’.

Most people who’ve achieved greatness failed numerous times before they succeeded. Einstein didn’t talk until he was four years old, and Lucille Ball was told she’d she was too shy to put her best foot forward. JK Rowling was turned down by scores of publishing firms until Harry Potter was finally accepted for publishing.

This is one of the best motivational videos about failure. Let me know what you think. Are you ready to fail?