Home » dating after divorce » Finding Love for the First Time in Her 40’s!

Finding Love for the First Time in Her 40’s! 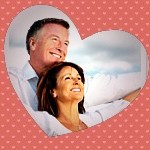 Jackie (not her real name) came to me for coaching after a 17-year loveless marriage. She confessed that she had never been in love with any man. She always chose men who were safe, men who wouldn’t hurt her. As a result, she had closed her heart to the possibility of true love, and her marriage was lonely and sad. The worst part was it was far from safe; her ex was disrespectful and self-centered.Through our work together, Jackie came to value herself and all that she brings to a relationship. She became a ‘high value’ woman, a woman who knows how she wants to be treated in every relationship. She learned that no matter how seemingly fantastic a man is, he may not be for her. And she learned to communicate her needs without nagging or pushing men away.

She found an amazing man on Plenty of Fish, and worked with me to ensure that she continue to value herself first and be an awesome girlfriend second. This has made her boyfriend value her even more.

They’ve worked through some pretty big bumps in the road. In the past, Jackie would have run away from both intimacy and conflict. With my help, she has embraced her vulnerability and has fallen in love for the first time in her life! Will this love last?

Jackie says, “The universe provided me with a gift by putting Sandy in my path.”

She has been a gift to me as well. There’s nothing that makes me happier than helping someone find love and sustain a healthy, happy, loving relationship. I’m thrilled for her! Congratulations, Jackie, for finding love for the first time – in her 40’s. And I have a little secret…she has hinted that he’s about to propose. She told me to pick out bride’s maid dresses. I can’t wait to celebrate the marriage of Jackie and her beaux.

Don’t you want to go on your last first date?