How to Spot Red Flags On the First Phone Call 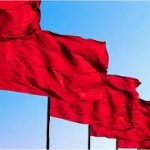 Two words of advice for women dating after 40: PAY ATTENTION. If you want to save yourself from days, weeks, months, or years of suffering and pain, pay close attention to the words and actions of a man. And believe it or not, the best time to pick up on any red flags is during your very first conversation. Why is this conversation so important? Men often reveal just about everything you need to know about their character and what you can expect from them in a relationship. You are not yet clouded with hormones like Oxytocin, the bonding hormone that is released through sexual activity. You know, that hormone that makes you a little stupid and puts a blindfold over your gut feelings about him? This is the hormone that has you shove all the negative character traits he displays under the proverbial rug. I’ll show you how you can detect red flags on the first phone call to save yourself from future heartache.

How to spot red flags on the first phone call

I have had the most revealing first phone calls with men I connected with online. They’ve told me about their diabetes, sex addiction, failed relationships, and bitterness towards their ex who ruined them financially. They have let me know that they are newly separated and interested in casual relationships with multiple women. They’ve revealed their estrangement from their kids and blamed it on their ex. If you pay close attention, you’ll learn how to spot red flags on the first phone call and discover whether he is first-date-worthy.

Most men love to talk about themselves at the onset of a relationship. They share information that they believe endears them to you. And then when they get into a relationship with you, they often clam up. I know, exasperating! But at the same time, how wonderful is it to have a secret portal to his character and relationship-readiness from that first conversation?

CASE STUDY ON HOW TO SPOT RED FLAGS

My client “Arielle” received a sweet email from “Abe” on Plenty of Fish. (All names are changed to protect privacy). He was nice-looking, fully dressed in every photo, didn’t have any pictures of motorcycles or large dead fish, and his email was kind and polite. They exchanged a few more emails, and Abe asked for her phone number. Finally, a man who was interested in escalating a relationship from email to phone! So many men get stuck in the email/text phase and never graduate to a phone call, so this was a definite plus.

She gave him her Google Voice number, the number I recommend all clients use for online dating. This number helps you remain private until you’re ready to share private information. Google Voice also allows you to block numbers, a great feature for dating, both online and offline. It puts you more in control of your dating experience. If you don’t yet have a Google Voice number, click here to get yours as soon as possible.

Later that night, Abe called. She immediately sensed his low energy. Perhaps he was a little nervous, which is understandable for a first phone call. So she paid less attention to his voice quality and more attention to his words. Here’s what she picked up:

Arielle is looking for a positive, forward-thinking man. She wants to be in a relationship with someone who has worked through his past baggage and lives a life with few regrets. Sure, everyone’s got baggage. It’s all about how you’ve processed it. She is proud of the inner work she’s done, and wants a man who energizes her, not someone who drains her. She was feeling very drained by Abe’s “shoulds” and regrets.

Red flag #2: Arielle is religious, and although Abe shared her religious affiliation, when she asked about his level of observance, he said he was agnostic. He was raised that way, and he was very happy as an agnostic. While Arielle can be a little flexible about how the man in her life practices their shared religion, at the very least, they would need to share a belief in God and observe some of the rituals. She wants to be able to share Holiday dinners with her significant other and her close family, and Abe would not fit into her lifestyle.  This was a deal breaker.

She had all the information she needed to know that he was not someone she wanted date. She told him it was nice talking, but felt they were not a good match. He thanked her for the conversation, wished her good luck, and hung up. All good, right?

Not so much. Here’s the email he sent a few minutes later:

Red flag #3: Abe showed his true colors in this follow-up email. Notice how reactive he was. He feigned good character by citing the “golden rule of kindness and care for others”, and then proceeded to insult Arielle by calling her a hypocrite, someone who looks down on the unfaithful. Arielle never put Abe down. She simply stated her must-haves, that being with a man who is on the same page religiously is important to her. That’s not an insult to an emotionally healthy man.

When she opened this final email, his words stung for a second or two. She asked herself, “Is this true? Am I really a hypocrite?” Then she took a deep breath. She knew she was kind. She chose her words carefully on that phone call, as she does throughout her life. She doesn’t judge how others choose their faith or lack thereof. It’s a highly personal thing, one that Arielle has revisited many times in her life.

She knew without a doubt that she dodged a bullet by putting an end to her relationship with Abe before it even got to a first date.

Wouldn’t it be great if you knew when to give a man a chance and when to shut the door before even meeting for the first time? There were two things at play that helped Arielle become crystal clear in her decision to end things with Abe.

She knew her 5 must-haves, the things she absolutely needed in a relationship. Without them, the relationship would not work. If you don’t yet have your must-have list, think about how you’d like to feel with your ideal relationship. Safe? Happy? Now identify what he needs to do in order for you to feel safe and happy. Those are your must-haves. Notice that they have nothing to do with looks, income level, or shared activities – which is what most people focus on first.

She identified her 5 must-not-haves, the things she would not tolerate in a relationship. These are the behaviors that if they were present, you’d get divorced. This is the line-in-the-sand. What you need to walk away from.

Having that level of clarity has helped her identify the men she’d like to date and the ones she won’t consider at all.