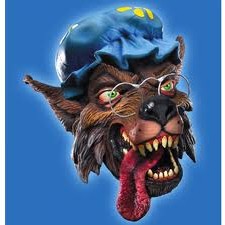 Have you ever dated a guy who turned out to be very different once you were in a relationship? People aren’t always who they appear to be at first. A character trait that looks like one thing can masquerade as something entirely different when you peal back a layer or two. You all know the story of Little Red Riding Hood and the big bad wolf. Have you ever dated a sweet guy, a so-called ‘grandma’ and later found out that he was a big bad wolf? Let’s explore that a little deeper…

It’s easy to fall for a charming guy. He smiles his sweet smile. His eyes twinkle when he stares into yours. You quickly fall in ‘love’ with this sweet talkin’ lady’s man. But a few weeks or months down the road and “What a beautiful smile you have” turns into “The better to eat you with my dear”!

Wait, how did that happen, you ask? He was such a great guy. He said such sweet things. I opened up to him. We were in LOVE!

How did he turn into that big bad wolf? He didn’t turn into anything. He was always the big bad wolf. You just couldn’t see that under his sweet frilly grandma bonnet. You saw what he wanted you to see.

And you saw what YOU wanted to see. You wanted a relationship so badly that you missed those sharp big teeth hidden behind his sweet smile.

Please don’t misunderstand me ~ I am not saying that all men are monsters underneath a sweet exterior. I am talking about how easy it can be to miss the big red flags in a relationship if you shut your eyes to them, especially if the attraction is very strong.

That’s why I suggest that you not sleep with him before you’re in a committed relationship. It messes with your head. It fogs your brain. It makes you see the grandma and not the wolf.

So, the next time you have any doubt about the guy you’re dating, take your time. Build the relationship slowly. Do it in a way that makes you comfortable.

If you are attracted to him, let him know. But DON’T sleep with him until you know him and trust him.

There’s plenty you can do before you hop into bed. There are lots of ways to build intimacy and trust in the relationship.

The slower you go, the more easily you can spot the wolf in grandma’s clothing.

You wouldn’t want  to date that guy who would ‘eat you up’, would you? He’ll only do that if you let him. So, Little Red Dating Hood, take it slow, and become a smarter dater!