Home » breaking up with grace » Why Do Men Disappear and Reject Me?

Why Do Men Disappear and Reject Me?

Posted by Sandy Weiner in breaking up with grace, communication skills in dating | 0 comments 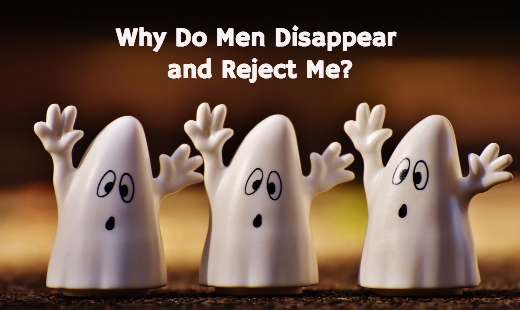 Ever wonder why men disappear? Whether it’s after a few texts or phone calls, or even a few weeks of dating, when men disappear, it sucks. Try this.

I think I am in the beginning stages of a new man disappearing. We’ve only been talking for five days. Wednesday and Thursday he texted me all day long, he called me, sent kiss emoticons. Today, I didn’t hear from him until I texted him this morning. His replies to anything I sent were short, no emotion, certainly no kisses. We haven’t met in person yet, but I already felt spoiled by his attention. So, I straight up asked him if something was wrong because he seemed distant today. I got no reply.

So, I sent another text asking if he had changed his mind about meeting and possibly dating. He called me immediately and said he was just leaving work and had been busy trying to finish a job, his phone had died and he was getting ready to go hunting, and he would call me again later.

It’s been 11 hours and I haven’t heard anything. I won’t contact him any further. Like you wrote in the first tip [from ‘Top 10 Reasons Why Men Suddenly Pull Away…and how to attract and keep the love you want”]—who knows why he left? I apologized for something I texted that might have offended him. He assured me I had not offended him. Oh well…this has happened to me twice this month by men I was talking to online. The first one just totally stopped corresponding with no explanation, yet he still looks at my profile. What the hell?

It’s hard not to let two rejections in a matter of weeks make me question what’s wrong with me…
Why do you think men disappear and reject me?

Why Do Men Disappear and Reject Me?

There’s nothing wrong with you…except for the fact that you keep falling for men who flake out on you. Sounds like this man ‘love bombed’ you. According to the dictionary, “Love bombing is an attempt to influence a person by lavish demonstrations of attention and affection”. That’s a big red flag to look out for in the future. Because those signs of attention are meaningless without follow-through.

A person’s actions speak much louder than his words and emoticons.

The problem is, when you finally meet someone who seems great (on paper), it’s easy to fill in the blanks and make him out to be something he’s not. You project the qualities you want him to have, and suddenly, he’s this amazing man. You imagine a relationship with him. You might even imagine marrying him. Only you don’t know him yet, do you?

Be a woman of value.

Value yourself enough to determine what YOU need in a relationship, what character traits your ideal man must have. When you’re dating, know that you’re the chooser. And make sure the next man has those qualities. Know your deal breakers, and make sure he doesn’t have any of those.

Don’t fall for a guy’s texts and emoticons.

It’s easy to be charming behind a computer or smart phone. You want to be with a man who proves himself to be a stand-up guy IN PERSON. Fall for the man who shows you how kind, considerate, caring, and loving he is IN PERSON.

When men disappear before they know you, it’s not personal and it’s not rejection. He doesn’t know you, so how can he reject you?

Sadie, there’s nothing wrong with you. There are just some things you don’t know or haven’t put into practice yet. That’s why I do the work I do, to help you value yourself enough to stop falling for these flakey guys. They’re players, and you deserve better.
If you’d like to set up a time to talk and get acquainted and learn more about how I work and how I might be of service to you, please click here: https://www.timetrade.com/book/VJDY6. Be a woman of value, and you’ll begin to attract quality men who don’t disappear.