Posted by Sandy Weiner in dating in midlife, single women over 40 | 0 comments 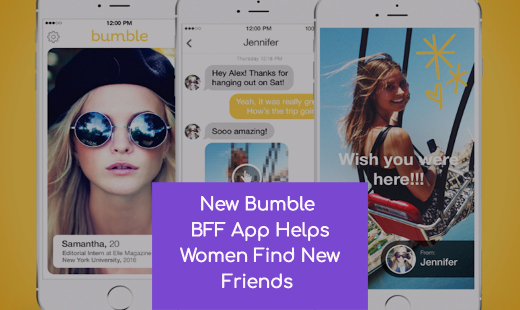 In today’s technologically advanced society, there is an app for nearly everything. Dating apps have become common, and the most recent ones simplify the process of finding prospects with platforms that allow users to swipe in one direction or the other to show their interest or lack of interest in a person.

Innovator Whitney Wolfe used this concept to come up with her own unique idea. She is the founder and CEO of Bumble. It is a dating app that lets women make the decisions and reach out to potential dates. Bumble’s platform is similar to Tinder, which is a popular dating app that she co-founded. Whitney devised another brilliant idea that uses the same platform but focuses on women finding platonic female friends with her new Bumble BFF app. 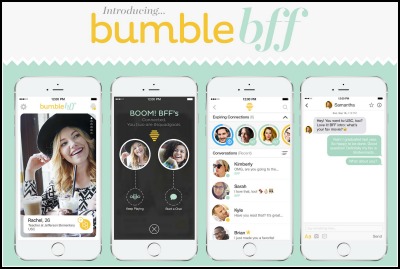 How Does Bumble BFF Work?

Users download the free Bumble app to their mobile devices, they fill out the profile information, and they use Facebook to sign in. Developers said that members can still use the regular Bumble app to find dates. However, the new app is an extension of the original. When users switch to the BFF app instead of the dating app, they will see matches of other local women who are also looking for a platonic friendship. To switch modes, users simply tap the settings icon in the Bumble app and choose the desired mode.

When two Bumble users who are interested in friendship both swipe right instead of left on the other’s profile, they have 24 hours to start a conversation. Both interested women can make the initial contact. This is similar to how the same-sex dating option works for Bumble. However, women who are in BFF mode will not be shown the profiles of women or men who are only interested in dating. Conversations for the dating app and BFF app are shown in the same box. Threads from the BFF app are in green, and dating conversations are in yellow. 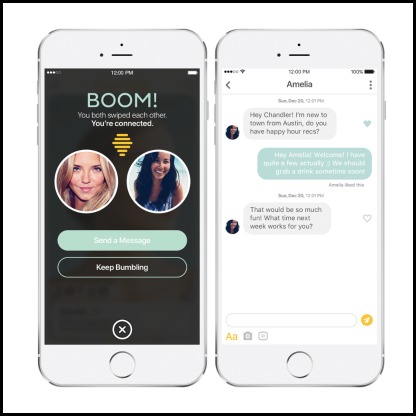 What Is The Goal Of Bumble BFF?

The mission of Bumble is to support and empower women by putting them in charge of making decisions. Whitney Wolfe says that Bumble is the anti-Tinder app. It limits selection and initial contact to women instead of allowing men and women to contact one another freely. With Bumble BFF, women being the initiators is what drove the app’s success. Whitney believes that part of being empowered is having a support system. Many women today do not get into serious relationships such as marriages or partnerships until they are in their late 20s, and they often lack a stable and reliable support system.

Since so many women move away from their hometowns for college or careers, they wind up in cities full of busy strangers where it can be hard to make friends and network. Their families and former friends may be hundreds or even thousands of miles away. Those who stay in their hometowns may see their best friends or families move away. With the Bumble BFF app, it is easy for women to find other compatible friends in a matter of minutes. They can talk, meet and become BFFs.

In addition to making a female-focused app, Bumble developed the BFF extension in response to an overwhelming amount of requests from users to stay on the regular Bumble app because they liked to find friends. Although many users found dates that led to serious relationships, they also met several good friends. Some were even using the app for the sole purpose of finding same-gender friends by adding a line to specify their interest in friendship.

Every great idea is developed from pain points, and Whitney Wolfe shared the pain point of users who requested the app because they lacked friends due to relocation. At 26 years of age, Whitney Wolfe is a college graduate who has started two companies and has lived in six cities. She sympathizes with women who move to new cities and want to find friends but are not sure how to find them. Whitney pointed out that relocating to a city where a woman has no connections can be scary, and a busy work life leaves little time to search for friends by attending social gatherings. From worrying about not having a friend who will come by to check on them to needing someone to vent and talk to, women voiced many concerns when they requested a friendship-only app. As someone who had been through all of those feelings and more, Whitney was happy to respond to the concerns of such women with an app that simplifies making friends.

Whitney Wolfe was excited about the release of the BFF extension of Bumble. She said that it removed some limitations that were in place with the dating app. In less than a week after the release of the BFF feature, there were over 1 million swipes. Although members use the same profile for dating and finding friends, developers are working on a new design that will soon allow them to set up dual profiles for each part of the app. Whitney is thrilled about the new app because it reflects Bumble’s brand better. She hopes to convey the concept of helping women share lifestyles, communication and support for one another. Also, she hopes that her brand will make women everywhere feel good about themselves and confident in their decisions whether they are seeking friendship or romance.