Home » dating after divorce » One Day ~ A ‘Love’ Movie Review

One Day ~ A ‘Love’ Movie Review

Posted by Sandy Weiner in dating after divorce, single women over 40 | 4 comments 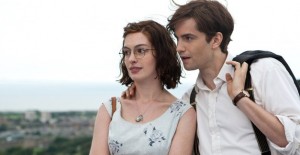 My friend and I were excited for the new release, One Day starring Anne Hathaway and Jim Sturgess. The movie covers twenty years of the couple’s July 15th dates. I was curious as to whether Anne Hathaway’s character, Emma Morley, and Jim Sturgess’s character, Dexter Mayhew, would have good ol’ Hollywood chemistry. Would they remain great friends or would they end up as a couple together?

We made extensive plans to go out last week to see the chick flick together. When I say extensive, I mean she had to arrange for her husband to be home from work to take over the care of their new baby in order for us to make it to the movie in time.

We were able to pull off our big plan, and as my friend handed off the baby to her husband, we jumped in the car and headed downtown to the theater. With great anticipation, we watched as the movie opened and we were first introduced to Emma and Dexter, who have a fairly disastrous almost hook-up on July 15, 1988, following their graduation from the University of Edinburgh. Why did they graduate in July? Not sure, but that’s apparantly not important to the plot!

Okay, so the movie was cast poorly, Anne Hathaway’s British accent was flawed, and the dialogue was sucky. But I am not going to focus on the details of the plot. This is not that kind of movie review. It’s a love review. It’s about what the movie made me think about love.

To sum up the message I got from the movie, loosely based on a quote about life : Love is what happens when you’re busy making other plans.

Here’s a bit of the plot that you need to know in order for this love review to make sense: Dex and Emma continue their friendship but live separate lives for most of those twenty years. Charming Dexter slowly crashes and burns into an alcoholic and drug-induced stupor, and the studious Emma works hard and slowly but surely achieves success as the writer she has always wanted to become.

It takes them nearly twenty years of a continued friendship to realize they are meant for each other. Hence the above message of the movie.

Does this happen in real life?

How many people do you know who started out friends and ended up married? I don’t know too many. After all, Patti Stanger, the Millionaire Matchmaker, said that one of the main reasons she broke up her 7 year relationship with her fiancé was that they started out friends, and the passion was never fully there.

Don’t get me wrong, I think friendship is an essential part of love. You need to be on the same wave length. You need to ‘get’ each other. Ideally, you are great friends with your spouse or partner.

But can you know each other for twenty years, witnessing each other go through relationship after relationship, maybe even get married and divorced, and suddenly realize that you’re really meant for each other?

I’m not fully buying it.

I’m afraid that this movie had a lot of Hollywood love moments that don’t happen in real life. The kind that make you yearn for something that is not realistic. The kind that set you up for failure and depression around the topic of love.

That’s why I post so many real life love stories on my Facebook page. I believe in love. I even believe you can love your best friend.

But, we all don’t look like Anne Hathaway or Jim Sturgess. Bad boy doesn’t usually turn good with the right woman sweeping him off  his feet. You don’t usually end up with your best friend twenty years later.

Hollywood can ruin love if you let it. So don’t.

Don’t compare your marriage or relationship to the one in the movies. Don’t yearn for something that is romanticized by the silver screen.

After the movie, my friend and I spoke over frozen yogurt about this romanticized version of love that sets the bar too unrealistically out of the ballpark for us humans.

So go out and find love ~ with real people. Build loving relationships one step at a time.  And don’t let Hollywood fool you into romanticizing love too much. Real love is beautiful. Raised toilet seat and all that comes with it.