Home » dating in midlife » Should Online Dating Be Approached As a Numbers Game?

Should Online Dating Be Approached As a Numbers Game?

Posted by Sandy Weiner in dating in midlife, online dating after 40 | 0 comments 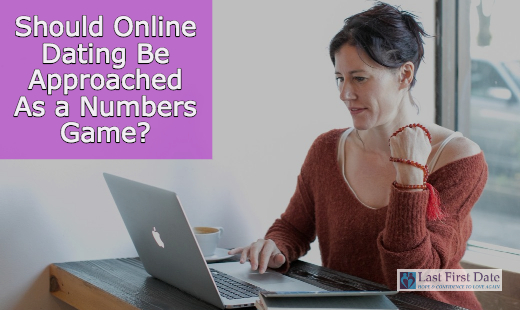 Is online dating just a numbers game? My guest blogger says this approach can be detrimental to finding love. Find out why…

It pains me greatly whenever I read about or listen to men cite—usually in annoyed tones—the precise number of dates they’ve been on through an online dating site. “It’s all a numbers game,” they say with frustration and annoyance. They’ll quote a number relative to the allotted time they’ve been online—six months, one year, as in, “I’ve been on 56 dates in ten months and…nothing!” And then I wince. Is online dating really just a numbers game? (In all fairness, I’m sure there are some women out there who follow this same approach to dating.)

Should Online Dating Be Approached As a Numbers Game?

The numbers game comment is off-putting to me because: (a) You sound like you’re whining; (b) You’re automatically setting yourself up for “red flag” prejudgment as in what’s wrong with YOU? I.e., why are you unsuccessful in finding someone to have a long-term relationship with given the number of dates you’ve been on? You must be a ‘player’; (c) It is slightly unnerving that you would keep track of and cite the specific number, especially when that number escalates.

While many who have dated online understand the frustration, the numbers game comment can be interpreted as either a form of bragging or an implied message that it can’t be me…it must be them.

The ‘it’s all a numbers game’ approach seems devoid of emotion, almost clinical and detached.

It is calculating in its implication and reduces the richness of the human factor of dating to a formulaic ratio. There is no synchronicity or the hope of discovery and romance within numbers. The numbers game dating approach eliminates the joy of the possibility of finding love through the hands of faith and fate.

The numbers game mindset makes one pause to consider the source. It feels like a superficial approach to dating. Sure, the actual intention of dating is usually to seek a relationship. But to me, this ‘numbers game’ mindset reflects a lack of faith—faith in oneself and faith in a higher universal power.

It’s as though one were playing the stock market or creating a successful formula for gambling: Well, if I go on 100 dates this year that should produce three potential possibilities.

The numbers game approach is all head and no heart.

A potentially fulfilling relationship must be approached with both head and heart, as opposed to formulaically gaming the platform and reducing it to a sort of dating lottery.

That said, I do acknowledge and understand a man’s frustration and don’t automatically judge him as an online player when he talks about the numbers game; however, this mindset neither promotes nor projects a feeling of human vulnerability and connectivity. You are guilty of that which you condemn and complain about—the mutual gaming on the online dating sites—those human, click-through catalogs that by default seemingly reduce participants to being displayed as online merchandise.

All online daters are limited to a summary profile page that must sell, in 30 seconds or less, the human product it’s featuring. You cram in all the great “features and benefits” you have to offer. The dating ratio method becomes a part of the problem of the online dating platform itself—a platform that is—in terms of truly getting to know someone over time–unnatural.

Allow attraction to grow over time.

If I were to have seen my late husband’s profile online, I’m not so sure we would have connected. It was only through getting to know him slowly through a friendship that developed over time—through a workplace association—that we each felt a deep connection that grew.

I’m by no means saying that online dating doesn’t work. It can and does for many. I’m not saying that you can’t discover someone wonderful online with whom you can develop a meaningful relationship. Rather, I feel everyone should give online dating a try. It’s just that the dating ratio method—especially quick “one and done” dates, doesn’t allow for slow discovery. Sometimes the attraction develops over time, and that can be a beautiful thing.

Today’s guest post is by Doreanna Feria, who can be reached at DoreannaFeria@gmail.com