Home » dating in midlife » Where Are All The Quality Men Hiding?

Where Are All The Quality Men Hiding?

Posted by Sandy Weiner in dating in midlife, love after 40 | 0 comments 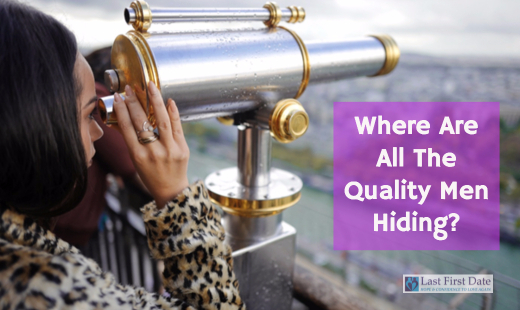 ‘All the nice guys are married already.’

(By the way – if you’re reading this and you haven’t said any of those things out loud, I would stop reading now. Because carrying on is likely to annoy you.)

As a man I would instantly want to present my view. I would say things like:

‘Us nice guys don’t get noticed.’

‘You say you want to meet a quality man, but when it comes down to it, you’d rather go out with an idiot’

‘As a good man, I kept being told ‘James you’re really nice, but we can only be friends’. If you wanted a proper bloke why do you do this?’

And then I would attempt to offer advice saying:

‘You girls don’t know what you want.’

As I would do this, my wife would be cringing. She’d later tell me that I was being too harsh and I was just pissing people off.

The bottom line is, I want to help. I’m proudly married to a beautiful wife. I want what I have for my friends. I’d like to give women an insight into the world of guys.

This is all very well – but it still doesn’t answer the question:

How does a woman in her forties or older meet quality men?

I say it’s really not that hard. It just takes a little thinking and action.

Recently speaking to a friend, she was complaining (okay maybe complaining is a bit harsh…it was probably more observing) that it’s hard to meet decent men. Online dating wasn’t quite producing the quality she wanted, and she’d been a bit shocked by the results on Tinder.

I wish I was surprised.

I think there is an easier way. We are surrounded by great people we don’t even notice. Living in a town or city; commuting to work; using the internet; owning a smartphone; all these things mean we spend less time interacting with real people. So, I suggested something very simple to my friend: ‘Compliment the men around you for something, and the quality guys will appear.’

She didn’t get it at first. So I said it was like buying a new piece of clothing, or a new car. Before I bought it, I never noticed them. After I bought it, suddenly they were everywhere.

‘It was exactly like that when I bought my Lexus. Until I bought the car, I never noticed them. Then – I kept seeing them everywhere.’

‘That’s what we’ll call it. ‘The Lexus Effect’.

Before I met my wife, I took action. I started complimenting the women around me: for their fashion sense, the way they helped me, or sometimes (as I got better at it) for something more personal such as having a great sense of humor. What showed up around me was – guess what – decent, attractive women.

If I didn’t mean it, or didn’t really feel it, I wouldn’t say it. As a guy I was sensible enough to know: complimenting a woman if I didn’t mean it would just be sleazy. It’s because there’s a mismatch between what I’m saying and what I’m thinking. There’s a hidden agenda. When I give a compliment for the sake of giving a compliment – it’s uplifting for the other person. A genuinely-given compliment is a gift.

The really interesting thing for me was noticing the woman’s reaction: from blushing, a quiet ‘thank-you’, to the range of strategies that women employ to downplaying compliments:

‘Oh this dress was really cheap. It’s nothing really.’

‘Yes but, I’ve been at work all day and just come off the tube, so I’m not looking at my best you know.’

I started with people I knew – because it was simpler.

As I got better, I started complimenting strangers in conversation. But make no mistake – starting to give compliments isn’t easy. I had all sorts of thoughts in my head before giving a compliment from “she’ll think I’m weird” to “what if she gets the wrong idea and thinks I’m coming on to her?” through to “what’s the point?”

The main reason for all those thoughts was the risk of rejection. So ask yourself: is it worth it?

Here’s something that happened to me.

When I was twenty-one, I was working for a company in London. I used to have lunch in the park and read a book when it was sunny. I remember one time I sat down to lunch under a tree. I saw an attractive young woman having lunch on the grass opposite. Without thinking much, I smiled.

To my surprise, she smiled back.

I felt my ears get hot, and I actually blushed. I went back to my book. My heart also beat a little faster.

I looked up again, hoping to catch her eye. We shared another look. This time I noticed that she was wearing a top with the logo of one of my favorite bands in the corner. I went back to my book, not really reading, but having a conversation in my head along the lines of: “I should go and start a conversation…but what if she doesn’t like me?…She likes Machine Head – she’s wearing a top…but I might say something stupid…You won’t, you can start a conversation…But she might think I’m weird…She won’t…But I’m dressed all smart and I’ve got to go back to work and mustn’t be late…It won’t take long…”

So I looked up a third time.

And she wasn’t there.

I looked around in vain. It was as if she had vanished. After that initial rush of adrenaline, I felt hollow and dejected. Then there was frustration and anger with myself.

Being more romantic that I like to admit, I went back to that spot at the same time, every day, for the next two weeks.

I never saw her again.

Life is not a perfectly-scripted romantic comedy.

The point is, opportunities like that appear all the time. It’s up to us to take them. Giving a compliment to a guy, for the sake of giving a compliment – without an agenda – is a chance to step outside the “game of dating”. It’s an opportunity to have a straightforward interaction without worrying about what they’re thinking and second-guessing yourself. It’s a space for a real connection; for a little adventure, and is totally worth it.

For a man, receiving a compliment is wonderful, but it can be difficult to know where to start. Here are some suggestions:

Here are some possible examples:

And now I’m married, and continuing to give my wife these little gifts every day makes a huge difference.

If you’re still not convinced, I have a challenge for you: compliment one man you know, genuinely, every day for two weeks. It’s my Two-Week Challenge to see the ‘Lexus Effect’ in action. Who’s in?

Bio: James D’Souza’s latest venture is findaniceman.com – coaching that empowers single women to appreciate their talents, so they can create the relationship of their dreams. A nice guy who became a quality man, he has been happily married for ten years. He works as a teacher (Economics and Psychology), and lives in south-west London, UK. Playing guitar, creating collages, and practicing Urban Krav Maga keeps him on his toes after turning forty. His writing has been featured on Good Men Project and Huffington Post, and he has guest-edited for BBC Radio5Live.