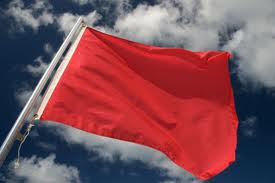 You know what red flags are? Those signs that a guy is bad news for you? Notice that I said, bad for YOU, not necessarily a bad guy. He might be a great guy, just not available for a relationship. In fact, some red flags are only temporary. (He’s separated. Rebounding out of a long relationship. Doesn’t have a job). But some are more permanent. (He isn’t that into you but sleeps with you anyway. He’s emotionally unstable). Whether it’s something that may change with time or not, the important thing to note is that they’re still red flags. They are waving in your face, telling you to stay away. Your gut knows it. So, why do so many women ignore those red flags and hope that ‘things will turn around’?

Butterflies, attraction, call it what you will, this is the thing that messes with your head.  When you are so physically into a guy, your body releases what I like to call ‘stupid hormones’.  You know the ones that make you think you’re in love prematurely? That feeling that you are soul mates (about three weeks into the relationship), and no matter what those little ‘glitches’ are (he’s 38 and still hasn’t moved out of his parents’ house? No problem!), you’ll work them out. Because you’re meant to be together. This is a relationship made in heaven.

Because if you ignore the negatives, you’ll be blinded by the ‘if-only’s.

a. ‘he comes around to wanting kids like I do. When he falls for me, he’ll want kids, too.’

c. ‘he practiced my religion.After he falls for me, he’s going to want to convert.’

And while there are some relationships where the above scenarios do turn around, it’s not the norm.

Guys are communicate in a much more simple fashion than us females. We analyze words. Men say what they mean.

Most men are not out to lie to you. They usually tell you the truth, often within the first conversation.

You choose to ignore him when he says, “I’m not ready for a relationship right now.”

Of course, he might be saying this while he kisses you. You’re thinking, “He is kissing me like he IS ready for a relationship. I think he’s falling for me.”

Six months down the road, he’s still not ready for a relationship, but you’re hooked. And then it’s hard to get unhooked.

So before you hook up with a guy who is screaming ‘red flag’, pay close attention to those first few conversations. He means what he says. Don’t get caught up in magical thinking.

When you see those red flags, whatever they may be, don’t expect him to change.

You’re better off finding someone who IS ready for a relationship. You want someone who wants you as much as you want him.

And keep your eyes wide open for those beautiful green flags!