How to Respond to an Offensive Online Dating Message

Posted by Sandy Weiner in online dating after 40, single women over 40 | 5 comments 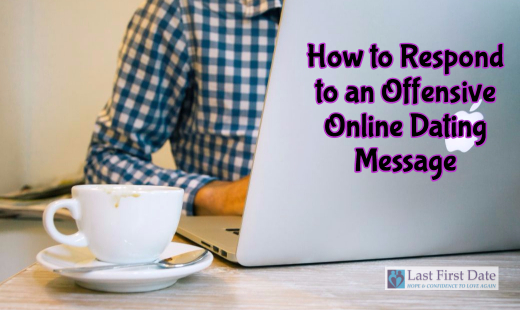 How do you respond to that seemingly offensive online dating message? This case study illustrates how one clever message could turn things around.

As a dating coach for women over 40, I find many women at this age are jaded and tired of dating online. As a result, they often write men off for what may seem like an offensive online dating message at first glance. In today’s post, I want to give you another perspective as to why men sometimes write messages that feel offensive. I’ll give you some ideas as to how to respond to those seemingly offensive online dating messages without being nasty.

How to Respond to an Offensive Online Dating Message

I’d like to share one of my own personal online dating stories. In a recent search on OkCupid, I came across a profile that stood out. Pictures: good looking guy with funny captions. Check! Profile: witty without being obnoxious or sarcastic. Check! His values seemed aligned with mine, and I was intrigued, so I wrote the first message—-which I highly recommend women do if they want to find love online.

Here’s how it went down… 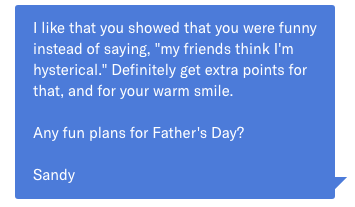 NOTE: I rarely find a man’s profile to be as funny and endearing as his was. That’s why I chose to open by mentioning how his humor not only resonated, but that I liked he also didn’t use the standard overused line, “My friends think I’m hysterical.” Or worse, “I’m really funny. I’ll keep you laughing, and I hope you don’t have a bladder problem.” (True story. I saw that in a profile once.) 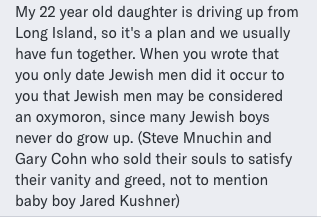 Really? This offended me for a number of reasons. One, he didn’t thank me for my kind words. What happened to social graces? Two, after answering my question about Father’s Day, he mentioned something he had read in my profile about only dating Jewish men.

While I appreciate when a man takes the time to read my profile, did he think that bashing Jewish men in politics would be endearing to me? I grew up Orthodox, and because of my traditional upbringing, I find that I’m more comfortable with men who understand and respect my heritage.

What he did in his initial online dating message was find fault in Jewish men in the political arena. Calling these men boys who never grew up came across as bitter to me. Whether I agree with his assessment or not, I don’t advise engaging in a negative/bitter discussion about ANYTHING in messaging, especially if you’ve never even met!

I ignored that message. I really had nothing to say.

And then he wrote again…

WTF? At this point, many women would have ignored, blocked, or reported this guy to the OkCupid police. First he bashes Jewish men in politics, next he gets sexual. Not so charming, right? This guy must be a jerk….

I cropped it to protect his identity, but he signed with his full name, which I interpreted as an act of trust, of showing your full cards so to speak. So, I chose to have fun with my response. Why not? I was curious as to what he’d say, and there was only one way to find out. 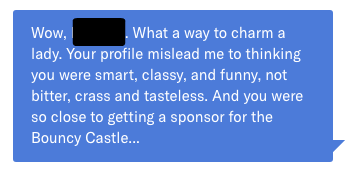 That last line about the bouncy castle was my attempt at keeping it light, not harsh or reprimanding.

I was prepared for any response. He could have ignored me. Or he could have been angry or obnoxious, like another guy on Tinder who went from being a gentleman to saying “F#@*k off” because of a question I asked!

His response surprised…and delighted me! 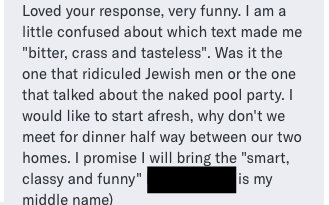 And this is why you don’t write men off so quickly. See how he rose up to his higher self instead of stooping even lower? It could have gone either way.

My favorite part? “I promise I will bring the ‘smart, classy, and funny.'” As a woman of value, when you respond to seemingly offensive messaging without being defensive or shutting a man down, you are opening yourself to receiving the best possible answer. How he responds to you taking the high road will show you his character. 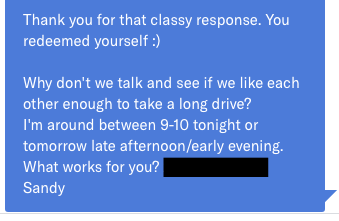 Notice that I began with humor and appreciation, and I didn’t just agree to drive 45-minutes to meet him without speaking first. That’s an important standard for me, so I shared my number and gave him a window into my availability.

And there you have it.

What began as a message that offended me, turned into a warm and fun connection. We haven’t yet spoken, so I don’t know if there will be a first date, but that’s not important to the message I want you to take away: DON’T WRITE PEOPLE OFF BEFORE GETTING TO KNOW THEM A LITTLE BETTER.

Online dating can be awkward and impersonal. The purpose of online dating is to meet and see if you click in any way. Yet, many people never even get to that first date, because they either write people off too soon, or they don’t initiate contact in the first place.

Get curious, be open, and don’t take that online dating message so seriously.

What’s your takeaway from my messaging story? I’d love to hear your thoughts!

P.S. Want to stand out from the crowd and find true love online? Click here to learn more about my highly successful online dating course.