Posted by Sandy Weiner in dating after divorce, dating in midlife, flirting, online dating after 40 | 0 comments 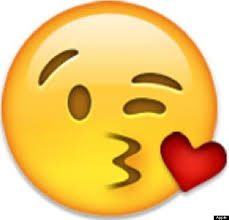 In a recent study by Match.com, it was revealed that singles who used emojis in texting had more sex than those who did not. I’m not kidding. “54% of emoji users had sex in 2014 compared to 31% of singles who did not,” said Dr. Helen Fisher, a biological anthropologist at Rutgers University who helped lead the study. Emojis can improve your sex life?

The reasoning behind this study is that those who use emojis convey more emotion in texting than those who don’t. Kissy-face emojis were particularly effective for conveying sexiness (shocking, right?).

Texting: Improve Your Sex Life or Ruin Your Relationship?

Many arguments begin with a misunderstood text. That’s why I discourage the use of texting in a developing relationship except when conveying factual information, like where to meet for dinner or that you’re running late and stuck in traffic.

While kissy face emojis may increase your chances of a roll in the hay, emojis can also be potentially harmful. I’m talking about the passive/aggressive use of emojis. This is when you use an emoji as a way to soften the blow. For example, putting a smiley face after a hurtful statement does NOT make your message less hurtful. It makes it confusing. It is the opposite of a clear way to communicate with your date.

Emojis can be a wimpy way to hide behind your true feelings.

When you communicate by text or email using emoticons or emojis to lighten up a difficult conversation, you are not saying what you really mean. I realize that for the majority of us, it’s difficult to express vulnerable feelings. But if you don’t, you run the risk of not having honest relationships.

Emojis vs. Clear Communication in Dating: A Case Study

In the following example, “Jane” is meeting “Jim” for the first time at Ted’s Diner. She’s been waiting 20 minutes, and she’s getting anxious. She texts Jim to find out where he is.

What Jane would have liked to say: “I’m angry at you for making me wait 20 minutes. How inconsiderate that you didn’t have the courtesy to let me know where you are and why you’re late! Grrrrrr.”

Clear communication text: “I’ve been waiting for twenty minutes. Are you okay? Please let me know when you think you’ll be here.”

In the last text, Jane made it clear that she has been waiting for a while. She is also letting Jim know she’s concerned for his welfare. And she wants the facts: how far away is he? When can she expect him? There is a time and place to discuss her feelings about being kept waiting. She’s better off doing that in person, not through a text.

Emojis can be playful and fun. Apparently, they can even improve your sex life. But clear communication is one of the cornerstones of a healthy lasting relationship. When you’re getting to know one another, communicate clearly and limit the number texts and emojis. You’ll have a much better chance of developing an honest, authentic relationship.

How do you feel about the use of emojis when communicating with a potential love interest? Please share your thoughts.