Home » self-esteem in dating » My Son Avi. My Inspiration

My Son Avi. My Inspiration 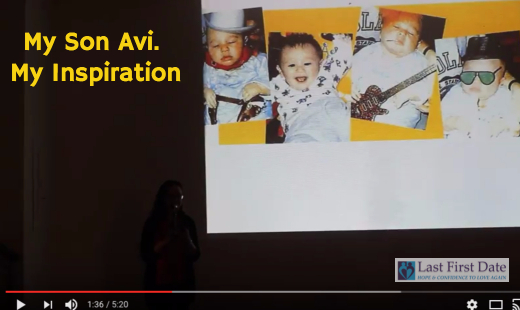 My firstborn son, Avi, was my inspiration. Born with a genetic disease, his life was short, but he taught me so many life lessons. Here they are…

What do a fisher price music box, 72 Rice Krispies, and a whoopee cushion have in common? They are all important parts of my son Avi’s life. Let’s start where it all began. On July 7,1986, I gave birth to my first child, and the atmosphere in the birthing room changed from joy to fear. My baby was whisked upstairs to the intensive care unit. And I was left all alone, shivering and afraid.

Eventually I learned that our son was born without an anus, and he had stomach and kidney abnormalities. His thumbs weren’t functional, and his hips were dislocated. He had VATAR syndrome, an acronym for his many birth defects. Three weeks later, we took him home with a feeding tube in his nose, a colostomy bag, and a kidney catheter. He was back in the hospital a month later with a severe kidney infection. He almost died, but…

Amazingly, he pulled through. Overwhelmed with relief, we took a series of silly photos of Avi in puppet clothes as a cowboy, and a blues brother. Before you call child protection services, it might help to know that Avi’s father is a puppeteer and professional comedian!

Our silliness seemed to rub off on Avi, because In spite of having 17 surgeries in his first two years of life, he was a very happy child, always smiling and laughing.

Avi taught me to be grateful and smile, especially when you’re going through tough times.

My Son Avi. My Inspiration

[Watch the video to hear about Avi’s many life lessons.]

At his first birthday, Avi was the size of a 6-month old. Everything came so hard for him–sleeping, eating, talking, and voiding.

Avi taught me to never take anything for granted!

Something in my gut told me that his original diagnosis was wrong. I had him tested, and three weeks later, she called with devastating news. He had Fanconi anemia, a rare and often fatal genetic disease that usually leads to bone marrow failure. Now his short stature, dangling thumbs, and his birth defects made sense.

Avi taught me to trust my intuition.

We were distraught. But instead of feeling helpless, I empowered myself by learning everything I could about this rare disease.

Avi taught me that knowledge is power.

If you’re ever faced with an illness, learn all you can so you can advocate for yourself or a loved one.

Music was an important part of Avi’s life. He loved his Fisher Price music box, singing along with perfect pitch.

Avi taught me to remember to sing. Especially when life gets you down.

After spending his first year on a feeding tube, Avi developed an aversion to eating. But one day, he ate 72 Rice Krispies at one sitting. It was the largest amount of solid food he’d ever eaten. We were so happy we made up a song “It’s Avi Ate Day. It’s Avi Ate Day”.

Avi taught me how important it is to celebrate and appreciate small achievements!

When he was two, Avi began riding a school bus every day to a special school. He made good friends, received excellent physical and speech therapy, and he especially loved being the class clown. Because of repeated hip surgeries, Avi took his first steps when he was almost four, while we were visiting a friend who had a whoopee cushion. He suddenly hauled himself up, walked across the room, and plopped down as the cushion blurted a big fat raspberry.

Sooo, for his fourth-birthday party, we put out a dozen whoopee cushions on chairs around the room. He walked back and forth from one cushion to the next, exploding into giggles with each splat

Avi taught me to play and enjoy life.

A few weeks short of his fifth birthday, Avi developed excruciating headaches. We rushed him to the hospital. He was scared. To distract him from his pain and fear, we said. “Avi, smile.” And he did. It was the last time we saw his precious smile. A few hours later, he died of a brain tumor.

After his death, many people told me how Avi changed their life. One of them was Maggie, his bus monitor. She had always been ashamed of her low-paying job, but Avi’s joy and love made her appreciate the importance of her work. She learned that she mattered.

These are some of the life lessons I learned from Avi:

Abraham Lincoln said, ‘In the end, it’s not the years in your life that count. It’s the life in your years.” Avi’s life was short, but his legacy will live on in our hearts forever.