Home » dating after divorce » Why Are You Still Single?

Why Are You Still Single?

Posted by Sandy Weiner in dating after divorce, dating in midlife, single women over 40 | 0 comments

On Thursday, April 17th, I was a panelist at the Great Love Debate in Greenwich, CT. 100 of Fairfield County’s most dynamic SINGLE WOMEN. 100 of its most ELIGIBLE BACHELORS. Seated on opposite sides of one theater; brought together for one special night to answer one simple question: WHY ARE YOU STILL SINGLE?” The Great Love Debate is a unique, interactive Town Hall-style event where 6 leading experts and an excited, engaged audience dish, discuss, dissect, and debate the current state of the date!The event was moderated by SAMANTHA KNAPP, Writer, Designer, TV & Radio Personality, and the panelists included THOMAS EDWARDS, Founder of The Professional Wingman® & Confidence Unchained, BRIAN HOWIE, Author & Creator of “How to Find Love in 60 Seconds”, DEBBIE NIGRO, Nationally Syndicated Radio Host, Media Entrepreneur, Founder of “Still A Babe”, KRIS RUBY, TV Commentator, Social Media & Trend Expert, Ruby Media Group CEO, ALLYSON SPELLMAN, Women’s Empowerment Coach, Author, Speaker, Television Personality, and yours truly.

The Great Love Debate was a unique opportunity for 100’s of men and women to learn from each other. I believe one of the biggest problems in dating is that there are far too many assumptions made. The event created the atmosphere for men and woman to ask questions, bringing to light the issues that singles are dealing with today.

Why are you still single? 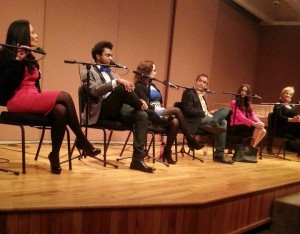 Highlights of the evening revealed that for many singles, it’s your attitude that is keeping you single. Negativity breeds negativity, so keep it positive, especially on a first date. Confidence was another topic that the panelists brought up several times. Bring your most confident self to dating, and don’t forget to smile at a man or woman you’re interested in. Make eye contact. Put away your cell phone and engage in conversation. And trust your intuition when your gut tells you that something doesn’t feel right. Above all, make sure to date with dignity and self-respect.

There were many questions about when to have sex in a relationship, how to flirt after 50, what men really want from women, and what women want from men. My favorite moment of the evening was when a client of mine asked the question, “After a first date, why do men say, ‘I had a great time, let’s do this again’, when they don’t plan on calling? I recently had a date with someone in this room who did that to me. I’ll be discreet and not point him out, but I want to know why men do this.”

The audience became excited. Who was the offender? Would he reveal himself? Yes, he did stand up and take the mike! He said he was brought up to be kind, and felt that it was rude to end a date with the truth. What should he say – that he didn’t feel a spark?

I agreed, and added that women should not take it personally when a guy doesn’t call after a first date. He’s not rejecting you. He doesn’t even know you well enough to hurt you. Move on to the person who is right for you. NEXT!

I really enjoyed hearing from the hundreds of singles, learning about their dating concerns. The mixer across the street at the restaurant/bar was the perfect venue for making love connections and continuing the exciting conversation after the event.

Now it’s your turn. Why are you still single? What question would you have asked me if you had been at the Great Love Debate?