Perhaps you’ll recognize yourself in my story. I had a long history of wanting men who didn’t want me. Can you relate? I’d fall hard for the guy who ignored me. The charming man who smiled his sexy smile…but never asked for my number. He’s the one I’d dream about. The guy who had a great online dating profile and seemed perfect for me? I’d write him a beautiful email that he never opened. And I’d feel bad about it. The witty, good looking man who dated me once but never called again? He’s the one I yearned for and thought about and beat myself up over. What did I do wrong that pushed him away? Um…nothing! Before I knew my worth, this was my toxic dating pattern: wanting men who didn’t want me. I eventually did the inner work, learned to love and value myself enough to stop this cycle of insanity. I’m sharing the story of a man who didn’t call after what I thought was a great date. If you’re anything like I used to be, you’ll see why it’s so important to stop wanting men who don’t want you!

A while back, I was set up with a guy I’ll call ‘Bob’. We met for dinner at an Indian restaurant. He was tall and handsome, just like my friend had promised. We discovered that we shared many common values and interests. He was smart, engaging, and sexy. Check, check, check!

We both loved the same inspirational TED talks. We liked to be outdoors in nature – he runs, I power walk. And we both loved spicy Indian food. We had many friends in common. A match made in heaven, right?

We laughed and shared some fun stories about our children. It was pouring and I had parked around the block, so he offered to drive me to my car. What a gentleman. He gave me a warm hug, and we both said we’d enjoyed meeting each other. I was positive he’d ask me out again. But I never heard from him again.

I began to play the date over and over in my head. Why didn’t he call me? Was it because I spoke about how bitchy teenage daughters can be? Maybe I shouldn’t have said ‘bitch’. Or maybe my outfit was too conservative, not sexy enough? Perhaps I wasn’t clear that I’d like to see him again. I said I had a good time, but I didn’t say, “I’d like to do this again sometime.” Maybe that was it. He didn’t know I liked him!

I thought about him for about a week, and then I got busy going on other dates with men who were more attentive – men who liked me. I was having fun, but not meeting anyone special. And every so often, Bob would pop back into my brain, and I’d start thinking again about why he never called.

Eventually, I stopped thinking about him altogether. But today, while walking with a good friend I hadn’t seen or spoken to in ages, I suddenly remembered, she knows Bob! I told her I had gone out with him, and she gave me this weird smile. “Okay, what do you know about him?” I asked.

“Well, he cheated on his wife many times with younger women. His ex wife is gorgeous, sweet, and does a ton of charity work. She’s amazing. And she put up with his cheating. Finally, he told her he wanted out of the marriage.”

“A cheater? Wow, I wouldn’t have guessed that from the way he behaved on our date.”

“Yep. And now he dates women half his age. He’s just looking for arm candy.”

And there you have it. While I was pining for a second date with Bob, wondering what I might have done wrong to turn him off, turns out he was a jerk. I am thrilled that we never went out again. I certainly dodged a bullet. As usual, it wasn’t me, it was him.

Proof once again to stop wanting men who don’t want you. Here’s the thing. Once you truly know your self worth, you won’t have the brain space to think twice about the man who doesn’t call back. Move on to find someone who values you for who you are. A ‘girl’ will chase a man who doesn’t want her. A grownup ‘woman’ will find a man of true character who doesn’t play games. 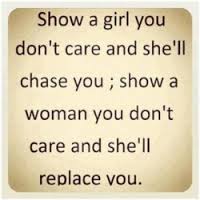 Have you ever chased someone who didn’t want you or played hard to get? Please share your story below.