Home » midlife » The Gift of Failure

The Gift of Failure

Posted by Sandy Weiner in midlife, single women over 40 | 0 comments 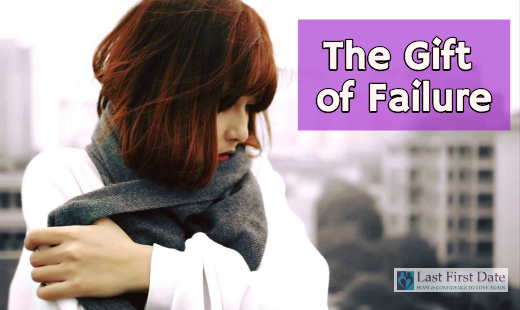 It was one of the most challenging experiences I ever had. I was embarrassed and ashamed. But, when I discovered the gift of failure, it changed my life.

With trembling hands and heart beating wildly in my chest, I stood holding the letter from the Coaches Training Institute.

If I passed my oral exam, I would be holding a congratulatory letter. If I failed, the envelope would contain a letter describing the rescheduling process. A week earlier, I had taken my oral exam, the last step in completing certification as a Life Coach. For two years, I had worked hard to become a life coach, integrating what I learned in class and applying it to my work and life.

The decision to become a Life Coach was the result of an ‘awakening’ as I emerged from a twenty-three year failed marriage into my new life as a single divorced woman.

Tired of merely surviving and staying small, I was ready to live a vibrant and passionate life, working towards realizing my full potential. And I wanted to help others do the same through my work as a coach.

I opened the envelope and learned that I didn’t pass the exam. I was heartbroken. It was challenging for me to get through my day as an art teacher at the summer sleep-away camp where I worked every summer. I was grateful for the distraction of a busy afternoon.

Later that evening, alone in the quiet of my room, my failure hit me hard. I can become very uncomfortable with extreme emotions, and I occasionally side-step important feelings in order to just get on with my life. That may work in the short run, but over time, it catches up and takes its toll.

As I sat in my room ready to experience whatever I was feeling, anger bubbled to the surface.

I was angry with myself for not passing; mad at the hundreds of dollars it would cost me to repeat the exam. I blamed the examiner who could have cut me some slack. I was feeling helpless and stuck, and with my next breath, I breathed in my shame. I felt my cheeks flush with embarrassment. So many had counted on me to pass my exam. What would they think of me?

A few deep breaths later, I realized these were only thoughts, stuff I was making up in my head.

I swallowed my pride and began the difficult process of calling my loved ones to tell them I failed. It took more courage to tell people I wasn’t as close to, but I mustered up the courage to expose my failure, determined to learn and grow from the experience. The act of speaking about it made it less embarrassing, and people were very supportive.

Ultimately, I realized it was my performance anxiety that held me back from being fully connected with my examiners.

I was so busy worrying about being a smart masterful coach that I got in my own way. I was so self-conscious that I became less conscious of the person I was coaching. I made it more about performance than connection. And that is lousy coaching! It’s definitely not indicative of the kind of coach I am capable of being.

My performance anxiety goes way back to elementary school when I wouldn’t raise my hand for fear of being wrong. I was so quiet and shy that my concerned parents took me to a psychiatrist to make sure I was okay. Turns out I was fine, just afraid of being embarrassed in public for making a mistake.

This self-sabotaging behavior has kept me small and safe for most of my life, but failing my exam was about to shock me out of this limiting behavior and launch me into a very important passage of life.

Nearly a week after opening that fateful letter, I was already looking at the bright side of failure, proactive and learning from my mistakes. I scheduled the exam so it would be just a few weeks away. I found an amazing new coach who began helping me deal with my performance anxiety and my self-judging saboteur.

Most importantly, I accessed my deepest core, my creative artistic self, as part of my healing.

The night I learned I didn’t pass the exam, I went into the ceramics room at camp. I took a blob of clay and set it before me. I deliberately chose not to make a functional piece, which was a stretch for me, the super-practical, everything-must-have-meaning artist. 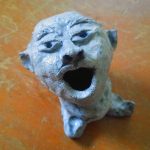 I once heard that Michelangelo would stare at a piece of stone until the form would reveal itself. I, too, spent some time staring at my blob until suddenly I knew what I needed to create. I began to reveal my saboteur hiding in the clay. I first created an image of a screaming face with hollow eyes. And then the face began to change. The eyes became angrier, the mouth widened. The face transformed over and over, until I ended up with a Buddha-like creature with a calm but powerful expression, slanted eyes, a bald head with pointy ears over a squat body with arms folded loosely over a chubby belly.

There was an endearing kindness to his face. He reminded me a little of my father. My ‘Buddha’ possessed an inherent strength and loving concern. The act of creating this Buddha-like creation taught me the importance of loving and embracing all of me (not just the ‘good’ parts), and to give myself permission to accept and process all that comes up for me around painful emotions. 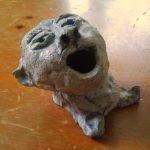 A few days later, I brought my sculpture to an outdoor Raku kiln firing. I put him into the flames where he underwent many chemical changes. Smoke billowed out from around the fire pit. The kiln reached over 1,800 degrees Fahrenheit in a very short time, and when the piece was removed, it was bright orange like molten lava. It was then smothered in sawdust in a large tin garbage can, then covered until it cooled off.

The whole process of transformation, of going through extreme temperature changes, was exceedingly cathartic to me. I felt like my inner saboteur was being raked through the coals and morphed into something positive that I could integrate into my life. My inner process was changing for good as my sculpture went through its own metamorphosis.

I had no idea what my piece would look like in the end, and I loved not knowing the outcome. This was the important last step in the creation of my healing sculpture; letting go of expectations. It is what I most needed in moving past my saboteur. I had learned that I needed to let go of perceived outcome and stay more present in my life. True power lies in keeping the present alive.

It took a new kind of courage and a quieting of self-sabotaging thoughts about embarrassment and judgment to be bold enough to face my failure and speak about it openly.

Here’s what I now know about failure: I firmly believe that if we do not risk, we will not move forward. And if we risk, we will most certainly fail some of the time. Failure can be a wonderful and powerful gift. I am making it my business to become an expert at learning from failure, and most importantly, an expert at connecting myself to my inner core, my full potential as a human. It is only through this connection that I can help  others connect to their essence, their true potential, and find the authentic love they deserve.

Had I not heeded the call to learn and grow from this tough experience of failure, I would not have become the woman I am today, someone who refuses to stay small, who is not limited by circumstance, but rather uses each life lesson as a stepping stone to a life well-lived. That is the ultimate gift of failure.

(Oh, and I passed the exam the second time. Becoming a certified life coach was one of the best decisions of my life. And failing the first time made me a far better coach.)

Can you think of a time when you failed at something that meant a lot to you? Please share your experience in the comments below.