Home » love after 40 » True Love: A Wedding to Remember

True Love: A Wedding to Remember

Posted by Sandy Weiner in love after 40 | 0 comments 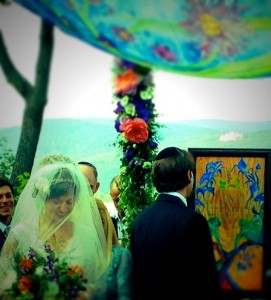 The Chupah, or wedding canopy, was magical; the pastel silk hand-painted fabric suspended on four poles adorned with red, purple, and green flowers. The setting was magnificent; West Point, New York, at a luxury hotel overlooking the Hudson River. The view was breathtaking; the tree covered mountains across the river and the river below, with the sound of water rushing beneath us. The weather was just right; warm and not raining, even though the skies were ominous.

This past Sunday evening, I joyfully witnessed the union of two people who were very much in love. The daughter of my high school friend, Erica, met Danny when they were teenagers. These 26 year-olds have been inseparable ever since. I have been to many weddings, but very few have had this palpable sense of true love. You could feel how right these two are for each other ~ the way they smiled at on another, the way their bodies moved in rhythm together.

I am inspired by real life love stories and I love to share them. This couple has been together for ten years. They knew they were right for each other from the beginning. And they grew together, which is remarkable when you think about the difference in maturity between a 16 year-old and a 26 year-old. A lot can change during those years.

I think the reason they grew together has to do with their core compatibility. Erica and Danny balance each other beautifully. She is very bohemian and artsy, and he’s works in white collar insurance sales.

They share many common interests, such as their love of travel. In fact, the tables at the wedding were not numbered. Instead, perched on each table was a photo, taken by Erica, of a place that she and Danny had visited. Our table was Telluride. How cool is that?

The attention to detail at the wedding was a reflection of the unique nature of this couple. The unusual band played a beautiful and unexpected combination of Gaelic and Jewish music.

Their dog, Duke, walked down the aisle, accompanied by two of Erica’s friends!

All in all, you could feel the uniqueness of the spirit of Danny and Erica in every last detail of the wedding, from the bubbles we blew at the ceremony to the gummy worms at the takeout candy bar as we were leaving.

I share this story to emphasize a point ~ that love is real, true love happens, and it’s not relegated to fairy tales and Hollywood movies.

I hope Erica and Danny’s story inspires you to think BIG about your love life. You future Mr. Right is out there. You just have to keep your eyes and heart open for him.

Believe in love. It is real. It is Danny and Erica. And it is you.