Home » dating in midlife » Warning: You May Be Dismissing Quality Men

Warning: You May Be Dismissing Quality Men

Posted by Sandy Weiner in dating in midlife, understanding men over 40 | 0 comments 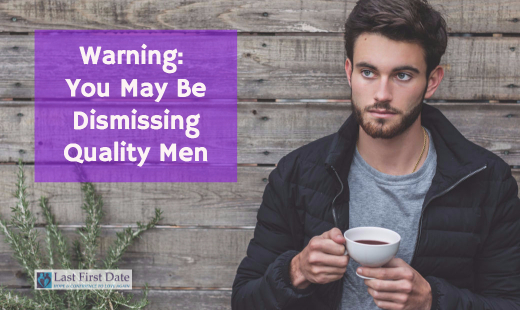 Searching for quality men? Here are three ways to discover if he is a player, a boring nice guy or a hidden gem; aka a quality man.

Today’s post is written by JamesD’Souza, a happily married nice guy who finally figured out how to be noticed and loved for the quality man he always was.

Women spend a lot of time complaining about men. Even the tone and title of blog posts seem to reflect a general frustration women have with men:

“Why Are Guys Head Over Heels for Me at First But Lose Interest After a Few Weeks?”

“How Do I Stop Wasting Time With Men Who Aren’t Good for Me?”

“What to Do When You’re Dating a Guy Who’s Afraid of Commitment?”

Is every woman who’s looking to meet a great guy only meeting men who behave like this? I know we’re not all bad because my friends and I are not.

From what I’ve seen on many dating sites for women, men are commitment-phobic players. I know those headlines are written to entice readers, and they wouldn’t be attractive if there wasn’t an element of truth. But, what if there’s another view? Could it be that the more extreme behaviour of some men ruins it for the quality men?

How You May Be Dismissing Quality Men

Why Quality Men Get Ignored

Stereotypes make life simpler to understand. Our brain takes in so much information that it would be overwhelming to interpret it all at once. The problem? Thinking our models are the truth instead of recognising them for what they are—a simplification. Most articles seem to present men simplistically to make situations easier to understand. The effect can be that quality men go unnoticed.

It also means that the more extreme behaviour of a few men creates stereotypes for ALL men. One extreme is The Player – the guy who is only interested in one thing, treats women a certain way, avoids commitment, and can seem manipulative. The truth is, he’s really just insecure. Think Alex Hitchens in Hitch played by Will Smith. Or more recently Jacob in Crazy, Stupid, Love played by Ryan Gosling.

At the other end are the Nice Guys – boring, insipid, almost emasculated. They end up hearing the phrase “you’re really nice, but we can only be friends” rather a lot from women. This is so frustrating for these men, that they often end up learning how to be Players (the tone and title of posts aimed at these guys is just as scary as those aimed at women!).

The third group, Quality Men, often gets ignored. Even worse, toxic masculinity becomes the aspiration for many of the Nice Guys. The media doesn’t help – but neither do women.

It is not all bad, though. There are books and movements questioning, analysing, and discussing masculinity and moving it forward: for example the Good Men Project, Steve Biddulph’s work, and the ManKind Project (a discussion of the state of manhood is a topic for another post).

As a self-aware woman, how can you empower the Nice Guys and avoid the Players? One way is to consciously attract Quality Men.

How do you define a Quality Man?

Quality Men more easily get lumped in with the Nice Guys and drowned out by the Players. You can begin to discover the quality guys around you in three ways.

#1. A quality man manages the basics.

If he’s on time, makes an effort on a date, and listens – he’s probably a Quality Man. Whilst he might have a plan to make life a little easier and prevent his nerves, you’ll get a sense of who he really is. Basic workability starts off boring in the short-run, but becomes romantic in the long-run.

Think of the guy who does what he said he would do. (My wife says that one of the things that surprised her about me when we started dating was that I called her at the time I said I would).

Part of the reason a Quality Man could get missed is that he might seem boring and predictable at first glance. In contrast, Nice Guys tend to over plan, be overly rigid, and end up seeming flat and controlling. The Players could seem a little too cool and practised. There’s an atmosphere of danger that’s short-term exciting. You might have a sense that he’s not fully there, or he’s following a step-by-step strategy. With both the Nice Guy and Player there will be very few (if any) glimpses of who he really is – instead it will feel inauthentic.

#2. Keep in Mind that Quality Men Are Human Too!

He will make mistakes. And guess what? He’s as nervous as you. What sets him apart from the Nice Guys and Players is that he apologises. If he’s late, he’ll say he’s sorry. He owns his mistakes. Nice Guys will only dig a bigger hole – maybe by over-apologising. Players will get themselves out of it with some strategy – but you’ll be left feeling a little uncomfortable and slightly confused by his inauthenticity.

The best way to nurture quality men is to stop reinforcing and valuing the stereotypes of the Nice Guy and the Player. Don’t tolerate or stay around men with negative or sexist attitudes. If a guy you know is behaving inappropriately, tell him. This will build your awareness.

Whilst doing this, appreciate and talk to men around you. Look for those moments where you get a sense of who they really are – those glimpses of authenticity. That’s how you’ll start to notice the Quality Men. You will begin to better trust your instincts. Encourage men by paying attention or reassuring. Engage with guys as people. (Remember he’s nervous too!)

By keeping a sense of discovery, it takes the focus off you, reduces your nerves, and puts you in charge. Yes this whole journey is awkward, but ultimately it is rewarding.

Bio: James’s latest venture is findaniceman.com – coaching that empowers single women to appreciate their talents, so they can create the relationship of their dreams. A nice guy who became a quality man, he has been happily married for ten years. He works as a teacher (Economics and Psychology), and lives in south-west London, UK. Playing guitar, creating collages, and practising Urban Krav Maga keeps him on his toes after turning forty. His writing has been featured on Good Men Project and Huffington Post, and he has guest-edited for BBC Radio5Live.