When I Was a Hurricane…A Love Story

Posted by Sandy Weiner in dating after divorce, love after 40, self-esteem in dating, single women over 40 | 6 comments 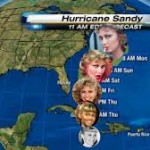 (Note: I wrote this on Monday, as Hurricane Sandy was blowing it’s 70 mph winds outside my window.)

It’s not easy being me. Come on, with a name like Sandy Weiner, you’re bound to be the butt of many jokes. They run the gamut from dirty to silly. Here’s one my friend’s 8 year-old made up: “What do you get when you drop a hot dog in the sand? A Sandy Weiner!” And then she’d fall off her chair laughing hysterically.

And then there was the Anthony Weiner Twitter sex photo scandal ~ an unfortunate time to be a Weiner.

Now, with Hurricane Sandy’s scary winds blowing up a storm outside my window here in Connecticut, my name takes on a whole new meaning. And there’s an unlikely love story that took place… When the hurricane gods pulled the name Sandy out of their hurricane hat, I was secretly delighted to be me.

It was exciting yet strange to hear my name mentioned throughout the week as people prepared for Hurricane Sandy. Every time someone said ‘Sandy’, my ears perked up. My first name is not all that common. Are they talking about me or the hurricane?

News of Hurricane Sandy showed up everywhere I looked. On Facebook, it was in almost every wall post. There were the lighter references, like the Bruce Springsteen ‘Sandy’ YouTube videos and the photos of Olivia Newton John as Sandy in the movie Grease.

Here’s a lighter post from Facebook today: ‘OK, Sandy, give us a nice (safe) reminder of how powerful God is and how puny we are in comparison and let’s get on with it!’

And this from a skeptic on Twitter: ‘Kanye West says he’ll let Sandy finish, but thinks Katrina was the best hurricane of all time.’

As the storm blew up from the south, the posts became more serious. Sandy was a storm of epic proportions. So many people injured and killed, homes flooded and burned, uprooted trees, devastation, a national disaster…

As I sit at my desk typing on a computer that’s still juiced up with the power that will probably be lost within the hour, I am humbled and a little scared in the face of ‘Frankenstorm Sandy’. The power of this storm is greater than any we’ve ever experienced.

And all this Sandy talk made me wonder if somehow there was a cosmic connection between the hurricane and me.

I could relate to many of the adjectives used to describe the hurricane, such as ‘strong’, ‘force of nature’ and ‘powerful’. It felt good to see my name associated with those power words in my own quest for personal empowerment and transformation. But power words are new to me. I have only started feeling my own power in recent years.

What I’ve learned is that to feel really powerful, I have to stop showing up as strong and capable of holding it all together all the time. True power and strength, I’ve recently learned, lies in our ability to be vulnerable.

Even though I share a name with a powerful storm, I’m not unique in my quest for inner power. I believe that everyone, at their core, is powerful beyond their imagination. Because when you pull away all the veils concealing and protecting your true self, when you accept all of you ~ when you can laugh at your mistakes and learn from them rather than be shamed by them, when you let your guard down and really connect to others, you are more powerful than your wildest dreams.

This is one of the ways to fall in love with yourself. And when you realize how wonderful you really are deep inside, that’s when you will draw in your true love partner.

As so many people are losing their power to this gale storm called hurricane Sandy, remember that no matter what happens, you still have so much power inside. No matter what storms surround you. It’s what’s inside that matters most.