Home » dating in midlife » Why Pass On the Nice Guy?

Why Pass On the Nice Guy?

Posted by Sandy Weiner in dating in midlife, love after 40, red flags in relationships, single women over 40 | 0 comments 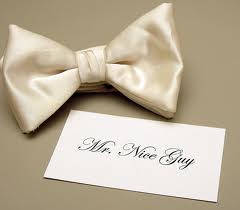 As a dating coach, I come across the ‘nice guys don’t fly’ syndrome quite often. Many women choose the bad boy more often than the sweet, kindhearted, good guy. Why?

I think there are a multitude of reasons why women are not attracted to nice guys, men who would be a great match. The number one reason? People are attracted to what they can’t have. It starts from the time you’re a toddler. Can’t get what you want? You throw a tantrum. Teenagers? For all intents and purposes, they are overgrown toddlers throwing bigger tantrums. Adults? The forbidden fruit is more fun. Just ask Eve.

Reason number two: Someone nice falls in love with you? There must be something wrong with him. Groucho Marx once said, “I don’t care to belong to a club that accepts people like me as members.” That about sums it up.

Why Pass On the Nice Guy?

The truth is the nice guy is exactly who you should be dating. He’s the one who will stick around, have your back, be a team player, and take care of you when you’re sick. He’s the guy with whom love can grow, not crash and burn like the toxic bad boy relationship.

Us humans don’t do relationships well. We aren’t born with the skills that make for a lasting relationship. So we bump around in the dark, hoping to land a good relationship and somehow, make it last.

How’s that working for ya?

Alright, you say, I’ll try and fall for the nice guy. But what about that elusive spark, the chemistry that is so important in a good relationship?

If the chemistry is at a 10, run the other way. Chances are, you’ll lose yourself in the relationship. Your bonding hormones will make you think you’re in love, but your logical brain will go all mushy on you. Stay away from the 10s, and go for the 5s.

So, the next time a nice guy makes a pass at you, don’t just walk away. Give him a chance. He’ll treat you well. He’ll be considerate and kind. You might have a lot more in common that you think. And you might just fall in love with that nerdy adorable nice guy.