Why Women Don’t Speak Up As Often As Men

Posted by Sandy Weiner in communication skills in dating, dating after divorce, dating in midlife, single women over 40 | 0 comments 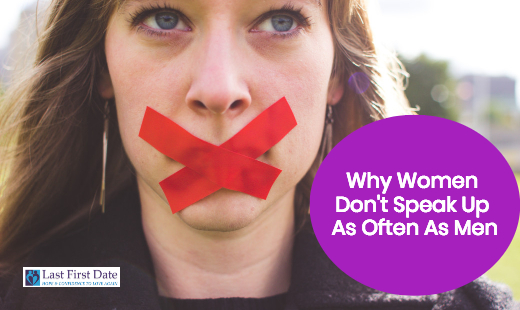 Want to know why women don’t speak up as often as men? In this video, I explain why this happens and how to begin to speak up much more in life and love.

A recent article in the New York Post revealed that women don’t speak up as often as men in academic seminars. In fact, women are two and a half times less likely to ask questions than men. Why do women speak up less often than men; at work, with friends and family, and especially in romantic relationships?

Why Women Don’t Speak Up As Often As Men

First, let’s first look at the differences between men and women’s communication styles.

In general, men grow up in a world where conversation is competitive. Men seek to achieve the upper hand or prevent others from dominating them through conversation.

Women grow up in a world where conversation is kind at all costs. Women use conversation to connect and gain confirmation and support for their ideas.

So… if men use communication to gain status and independence, they will speak up more readily.

If women are nice at all costs, they will not speak up if they don’t feel safe.

Why Don’t Women Feel Safe to Speak Up?

Many of us have been shut down when we spoke up in the past. I can still remember being out for a walk around my neighborhood with my husband. I thought it was a good time to bring up a concern in our relationship. He got so triggered, he left me and walked home alone. Ouch! When this happened over and over again, I felt less and less safe to speak up about important matters.

How can you find a safe space where you’re comfortable speaking up?

You create it yourself. You set the scene for a safe and connected conversation. When you know what your intention is in advance, you state it up front. You don’t confront, you create a space where conversation can flow back and forth.

When you know how to clearly express what you feel and need, you are able to have a collaborative conversation., where the intention is to build and connect, not attack and break down.

Learn more in this video

Learn to speak up at the Speak Up As A Woman of Value LIVE Online Workshop October 7th, 2018. If you miss the deadline, you can still get the replay by registering.